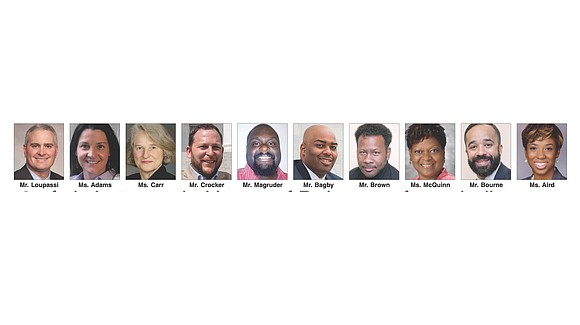 Richmond voters will help fill five of the 100 seats in the Virginia House of Delegates that will be up for grabs on Election Day.

The most competitive race involves Delegate Loupassi in the 69th District that includes the western and southwestern parts of the city.

Dr. Adams, who is health director for the Virginia Department of Behavioral Health and Developmental Disabilities, has sought to portray Delegate Loupassi as a do-nothing representative when it comes to supporting measures promoting education, economic development and the environment and increased pay for teachers and law enforcement officers.

Delegate Loupassi, who has become a major influence in the election of judges, touts his work to ensure public schools spend more money on instruction, provide support to small businesses and increase public safety.

An attorney, Delegate Loupassi also has become the lead legislative supporter of a Richmond citizens’ initiative to make modernization of Richmond’s aging public schools the top priority — an initiative that Dr. Adams has called “flawed” and does not back.

Delegate Carr is regarded as the odds-on favorite to win a fifth term in the 69th District that includes much of South Side. She is facing a challenge from two long-shot, third-party representatives, libertarian Jacob A. “Jake” Crocker, who owns three Richmond restaurants, and Green Party member Montigue T. Magruder, a fry cook and scooter mechanic.

Mr. Magruder has been the most active in pushing an agenda promoting alternative energy and a higher state minimum wage.

Delegate Carr, outreach director at St. Paul’s Episcopal Church, generally is considered too experienced, too entrenched and too popular to be pushed out of the 69th House seat by either candidate.

Delegate Bagby, director of operations for the nonprofit Peter Paul Development Center in Church Hill, also is expected to easily handle independent challenger Preston T. Brown, a businessman, to secure his second full term serving the 74th District, which includes a small area of North Side.

Unopposed for election are Democratic Delegate Delores L. McQuinn, 70th District, who is seeking her fifth full term in a district that includes a large share of the East End, and Democratic Delegate Jeff M. Bourne, 71st District, who is seeking his first full term representing the district that includes most of the city’s North Side.