Richmond Christian Center to be sold 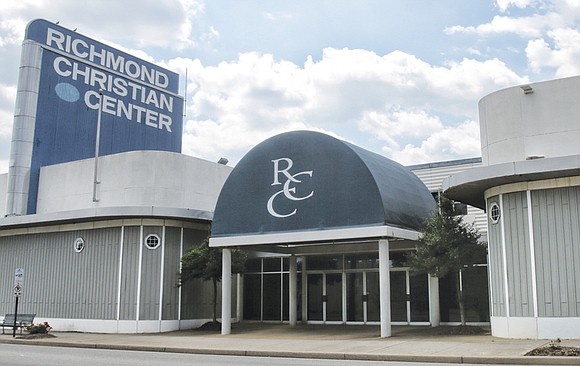 The fate of the Richmond Christian Center is expected to be announced once the trustee appointed to oversee the church decides whether the Cowardin Avenue property should be sold to United Nations Church International or Genesis Properties LLC. Richmond Free Press Photo

Will it remain a church, but under a different name? Or will it be sold for development?

These questions will soon be answered about the property in the 200 block of Cowardin Avenue in South Side where the Richmond Christian Center has made its home for 32 years.

With fewer than 150 members remaining, RCC is facing the forced sale of its 5-acre holdings, mainly a former car dealership and service center and parking lots.

The sale would close out an unsuccessful four-year effort to emerge from bankruptcy, a saga that began in November 2013 and included the dismissal of its founding pastor, Stephen A. Parson Sr.

Seeking to write the final chapter, Bruce Matson, the trustee appointed to oversee the church by the U.S. Bankruptcy Court, has secured permission to decide between two bidders — an independent church, United Nations Church International, which is seeking expansion room, and Genesis Properties LLC, an apartment development company in Richmond.

Mr. Matson told Judge Keith L. Phillips that he would make his decision based on the best interests of the RCC congregation and its creditors and deliver it to the court on Tuesday, Nov. 7.

The trustee told the court he expects the sale to be finalized before the new year to pay off about $2.5 million in remaining debt, including more than $2.1 million that RCC still owes its lender, Foundation Capital Resources.

The trustee’s push to sell has forestalled FCR, the RCC lender, from being granted permission to foreclose since RCC stopped paying on the loan a few months ago.

Judge Phillips cleared the way for Mr. Matson to proceed after rejecting a final effort by Mr. Parson to gain reinstatement as pastor.

In court Oct. 5, Mr. Parson told Judge Phillips that neither he nor anyone else had authority to remove him as pastor and that he should be allowed to return to the RCC pulpit.

Judge Phillips rejected the request, telling Mr. Parson that it was contradictory that he would request reinstatement by the court while claiming the court had no authority to remove him.

Mr. Matson did not disclose the bids that have been submitted to him. The city values the RCC property at about $4 million for tax purposes, though the church is exempt from paying city property taxes as a religious organization.

Since becoming involved in 2015, Mr. Matson has supported RCC’s efforts to survive and even developed a reorganization plan he hoped would help the congregation get the church back on its financial feet.

RCC officials are privately hoping that Mr. Matson’s past support could aid the 700-member UNCI, which Bishop Orrin K. Pullings Sr. leads with his wife, Dr. Medina Pullings. UNCI has affiliates in four other cities.

The Pullings founded the non-denominational UNCI in New York in 1996 and launched the Richmond affiliate that they currently pastor in 2003. Other affiliated churches operating under the UNCI banner are located in Atlanta, Charlotte and Fredericksburg, along with two churches in Queens, New York, including the first church that the Pullings founded. UNCI also has a church in Uganda.

While Bishop Pullings could not be reached for comment, RCC sources said that his goal is to merge RCC with his church and to maintain the property as a faith center under the United Nations Church banner. His purchase also could mean stability for other churches and small businesses that rent space on the RCC campus, as Bishop Pullings apparently is interested in keeping the independent entities on the RCC campus to help cover the cost of the purchase.

Currently, about 18 for-profit and nonprofit groups are renting space at RCC, officials have said.

Rhonda Hickman, chair of the RCC board of trustees, declined to comment on the future of RCC.

Meanwhile, Genesis is eyeing the property for additional development. The company already has been involved in developments east of the church at Hatcher Tobacco Flats at 151 W. Commerce Road and the Lofts at Trolley Station at 212 W. 7th St.

The company did not respond to a request for comment.