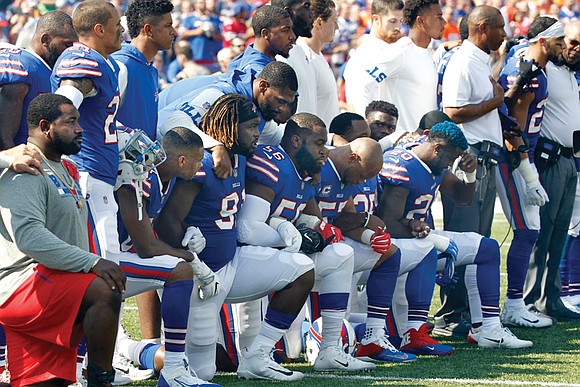 Players with the NFL’s Buffalo Bills take a knee during the playing of the national anthem before last Sunday’s game against the Denver Broncos in New York. Right, Olympic gold medalist Tommie Smith, center, and bronze medalist John Carlos raise their fist with the symbolic “Black Power” sign during their medal ceremony at the 1968 Summer Olympics in Mexico City after winning in the 200-meter track event. Jeffrey T. Barnes/Associated Press

A new poll suggests President Trump and his caustic scolding of athletes — many of whom are African-American — does not sit will with a majority of Americans, including sports fans.

The poll found 57 percent of adults, including sports fans who watch NFL games, do not support the president’s call for protesting players to be fired.

Several political analysts suggested President Trump’s latest actions were designed as a diversion. He has a record of targeting racial and cultural divisions to distract from his policy agenda or from problems he’d prefer the news media not cover. His weekend tweets drew attention away from a flagging effort by Senate Republicans to repeal the Affordable Care Act, or Obamacare, which would have hurt millions of people.

Whatever the reason, the president spurred a renewal of interest in athletes’ protests, which New Jersey Sen. Cory Booker described as “a noble tradition” involving such notable figures as the late boxing great Muhammad Ali, who opposed the draft during the Vietnam War.

It also called up remembrances of Olympians Tommie Smith and John Carlos who raised their fists in the day’s black power salute as the national anthem was played during their medal ceremony at the 1968 Summer Olympics in Mexico City.

The latest burst of protests goes back to 2016, when San Francisco 49ers quarterback Colin Kaepernick stirred a national debate after refusing to stand during pre-game renditions of “The Star-Spangled Banner.”

Instead, Mr. Kaepernick dropped to one knee to protest against police violence against African-Americans.

Mr. Kaepernick, who is now a free agent, has not been signed to a team this season.

Benjamin T. Jealous, former president of the national NAACP and now running for governor of Maryland as a Democrat, said the president’s attacks had forced a more forthright reckoning of the rights of athletes to speak their minds.

“He ultimately challenged each of us to stand up and be very clear about what our flag stands for and what we believe,” Mr. Jealous said.

“They should all kneel, not against the flag, but against the interference by Mr. Trump with their First Amendment rights,” Rev. Jackson said, urging players not to underestimate their power.

Admired athletes like Mr. Curry and Mr. James can take on the president through their vast audience of followers on personal social media sites. Unlike sports media figures of the past, they can communicate with hundreds of thousands of people directly, bypassing team owners and the media.