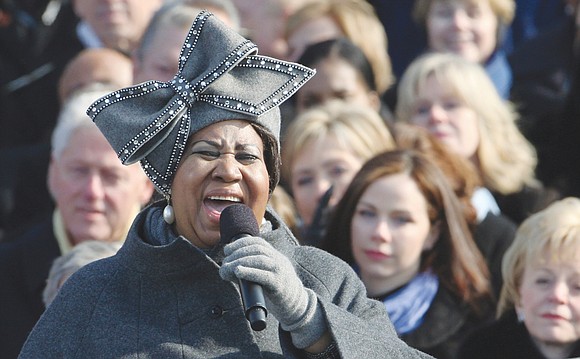 Aretha Franklin, the glorious “Queen of Soul” whose music became the backdrop for a generation and a theme song for both the civil rights and women’s movement, will be laid to rest Friday, Aug. 31, at Woodlawn Cemetery in Detroit.

The beloved recording artist died at her Detroit home on Thursday, Aug. 16, 2018, after waging a quiet battle with pancreatic cancer. She was 76.

Her entombment at a family gravesite alongside her father, the Rev. C.L. Franklin, brother Cecil Franklin and sisters Carolyn and Erma Franklin will follow a two-day public viewing Tuesday, Aug. 28, and Wednesday, Aug. 29, at the Charles H. Wright Museum of African American History in Detroit, followed by a funeral on Thursday morning at Greater Grace Temple.

Attendance at the service will be limited to family and friends, relatives announced last week through a publicist.

Blissful on “(You Make Me Feel Like) a Natural Woman,” despairing on “Ain’t No Way” and up front on “Respect,” few performers were so universally idolized by peers and critics as Ms. Franklin and so exalted and yet so familiar to their fans.

Ms. Franklin’s fans couldn’t get enough, nor could the music industry honor her enough. She won 18 Grammy Awards and, in 1987, became the first woman inducted into the Rock and Roll Hall of Fame.

But her status went beyond “artist” or “entertainer” to America’s first singer, as if her very presence at state occasions was a kind of benediction. She performed “God Bless America” at the inauguration of President Carter in 1977, sang at pre-inaugural festivities for President Clinton in 1993 and at the dedication of the Martin Luther King Jr. Memorial in Washington.

President Clinton awarded Ms. Franklin the National Medal of Arts in 1999 and President George W. Bush awarded her the Presidential Medal of Freedom, the nation’s highest civilian honor, in 2005.

But Ms. Franklin’s best known appearance with a president was in January 2009 when she sang “My Country ’Tis of Thee” at President Obama’s first inauguration. She wore a gray felt hat with a huge, Swarovski rhinestone-bordered bow that became an internet sensation and even had its own website.

In 2015, she brought President Obama and many others in the audience to tears with a triumphant performance of “Natural Woman” at a Kennedy Center tribute for the song’s co-writer, Carole King.

Her voice transcended age, category and her own life.

Born March 25, 1942, in Memphis, Tenn., the talented preacher’s daughter grew up in Detroit after moving there with her family from Buffalo, N.Y. It was at Detroit’s New Bethel Baptist Church, where her father was pastor, that Ms. Franklin learned the gospel fundamentals that would make her a soul institution. She got her start as a singer touring with her father’s gospel caravan when she was a teenager.

Rev. Franklin was among the most prominent Baptist ministers of his time. He recorded dozens of albums of sermons and music and knew such gospel stars as Marion Williams and Clara Ward, who mentored Ms. Franklin and her sisters Carolyn and Erma. Both sisters sang on Ms. Franklin’s records, and Carolyn also wrote “Ain’t No Way” and other songs for Ms. Franklin.

Music was the family business and performers from Sam Cooke to Lou Rawls were guests at the Franklin house. In the living room, the shy young Aretha awed friends with her playing on the grand piano.

Lifelong friend and musical compatriot Smokey Robinson said in an interview that he met Ms. Franklin when she was just 5 or 6 years old and heard her sing and play the piano “almost like she did as an adult.”

In 1956, she released a gospel album through J-V-B Records. Four years later, she signed with Columbia Records, recording several albums and a handful of minor hits. Franklin knew Motown founder Berry Gordy Jr. and considered joining his label, but decided it was just a local company at the time.

Her breakthrough came in 1967, when she signed with Atlantic Records and was backed by the now famous Muscle Shoals rhythm section. She recorded the horn-led “Respect” with its “sock-it-to-me” chorus. It rocketed to become her first No. 1 hit and her eternal signature song.

Becoming an anthem for the civil rights and women’s movements, the song was so profound that Ebony Magazine called 1967 the year of “ ’Retha, Rap and Revolt.”

“In black neighborhoods and white universities, in the clubs and on the charts, her hits came like cannonballs, blowing holes in the stylized bouffant and chiffon Motown sound,” Gerri Hirshey wrote in “Nowhere to Run,” a history of soul music that was published in 1984.

Ms. Franklin was named one of the 20 most important entertainers of the 20th century by Time magazine, which celebrated her “mezzo-soprano, the gospel growls, the throaty howls, the girlish vocal tickles, the swoops, the dives, the blue-sky high notes, the blue-sea low notes. Female vocalists don’t get the credit as innovators that male instrumentalists do. They should. Franklin has mastered her instrument as surely as John Coltrane mastered his sax.”

Ms. Franklin endured the exhausting grind of celebrity and personal troubles dating back to childhood. The mother of two boys by age 16 — she later had two more — she struggled with her weight, family problems and financial setbacks.

Her strained marriage in the 1960s to then-manager Ted White was widely believed to have inspired her performances on several songs, including “Since You’ve Been Gone,” “Think” and “Ain’t No Way.”

Her second marriage, to actor Glynn Turman in 1978, also ended in divorce.

Producer Jerry Wexler nicknamed her “Our Lady of Mysterious Sorrows.”

Since her death, Ms. Franklin has been lauded for her support of a variety of causes, including the Civil Rights Movement, AIDS research, Special Olympics, childhood diabetes research and anti-hunger initiatives. In addition to performing in support of advocacy organizations, Ms. Franklin also reportedly helped Dr. Martin Luther King Jr. meet payroll for the Southern Christian Leadership Conference when financial backing waned after he spoke in opposition to the Vietnam War.

Ms. Franklin’s autobiography, “Aretha: From These Roots,” came out in 1999. But she always made it clear that her story would continue, and that she would sing it.