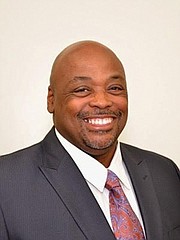 Ricky Jackson said he is “proud to be a Unionite.” But that didn’t stop him from dealing his alma mater a recent basketball beating.

Coach Jackson, of the Virginia Union University Class of 1992, is a former VUU basketball manager and student assistant coach who is head basketball coach at Claflin University in Orangeburg, S.C.

Coach Jackson’s Claflin Panthers defeated the VUU Panthers 72-70 on Dec. 6 in South Carolina. It was the first meeting of the teams since Claflin joined the CIAA this season.

A native of Philadelphia, Coach Jackson received his degree in recreation administration at VUU.

“I was in Coach Robbins’ golf class (at VUU) and he asked me about being a manager. It took off from there,” Coach Jackson said in a Free Press telephone interview.

“Coach Robbins had a tremendous impact on my life as someone who taught me the game and also taught me about being a man.”

During that time, Coach Jackson went on recruiting trips with then-VUU Assistant Coach Pierce Callaham and volunteered with the women’s program coached by Moses Golatt.

Also, current VUU Athletic Director Joe Taylor, who was VUU’s football coach at the time, was among Jackson’s classroom instructors.

Coach Jackson did not play basketball in college or high school. But he was fortunate to become involved with superb talent at both locations.

Gathers and Kimble went on to star at Loyola Marymount University. Gathers died of a heart condition before entering the NBA. Kimble was a first round draft pick of the NBA Los Angeles Clippers.

Coach Jackson’s VUU classmates included Terry Davis, A.J. English and Jamie Waller, all of whom went on to play in the NBA.

Coach Jackson received his VUU degree after the fall semester in 1991. He left Richmond then to become a recreational supervisor at a nursing home in Philadelphia.

In the spring of 1992, VUU won its second NCAA basketball crown with such luminaries as Derrick Johnson, who was named Division II Player of the Year.

Prior to his arrival at Claflin, Coach Jackson was head coach at Gloucester County College in New Jersey and an assistant coach from 2008 to 2013 at Shaw University in Raleigh, N.C., a member of the CIAA.

Coach Jackson is now in his sixth season at Claflin University. His senior-laden team last year went 26-7, won the SIAC Tournament and advanced to the NCAA playoffs.

Thrust into a rebuilding mode, Coach Jackson’s team was 4-7 after defeating VUU.

“We’re hoping the Union game will help get us going in the right direction,” Coach Jackson said.

“I wish nothing but the best for Union and for Coach (Jay) Butler. I’m still very close to Coach Robbins. I hope they (the VUU Panthers) have a great season — except against us,” he said with a chuckle.

VUU and Claflin could meet again in the CIAA Tournament. Claflin will not be coming to Richmond until the 2019-2020 basketball season.