VUU to induct 8 people, 1 team into Athletic Hall of Fame 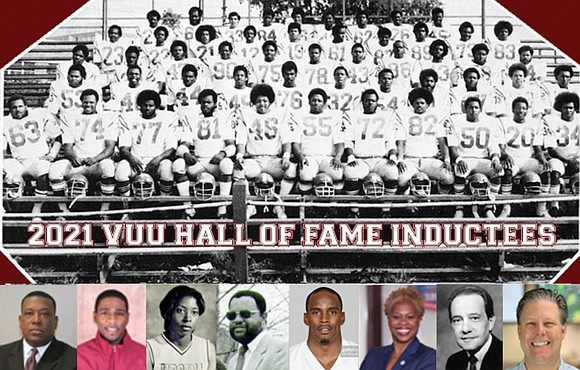 The Class of 2021 features eight individuals and one team—the 1973 CIAA championship football team.

They will be inducted on the evening prior to the VUU versus Shaw University football game at 1 p.m. Saturday, Oct. 2. The inductees also will be honored during the football game.

Here are the honorees:

•1973 Panthers football team: Under Coach Willard Bailey and defensive coordinator Jesse Chavis, the 1973 Panthers posted a 9-1 record and won their first conference title in 50 years. The lone loss was to South Carolina State University. The 1973 Panthers shut out six of their last seven opponents, including a streak of putting four straight “doughnuts” on the opposing scoreboard.

•Willard Coker: From Winston-Salem, N.C., he brought glory to VUU as a basketball player, assistant coach and head coach. He was recruited to VUU by Coach Robert Moore and played under Coach Moore and Coach Dave Robbins.

He was a key coming off the bench for VUU’s first NCAA Division II title in 1980. He also served as an assistant coach under Robbins for 23 seasons, helping the Panthers to two more NCAA crowns, 10 CIAA championships and 19 NCAA playoff berths. In his three seasons as head coach, the Panthers went 55-25.

•Melvin Edison: The speedster left a last- ing impression on the Panthers’ indoor and outdoor track and field history. From 2006 to 2010, Edison excelled in the hurdles and sprints, earning multiple CIAA and NCAA honors. He accumulated three NCAA All-American awards and was an eight-time, All-CIAA performer. He was named VUU Athlete of the Year in 2008 and 2010.

•Tracie Harris Haygood: The Lady Panther was a superstar on the basketball court and in the classroom. She scored 1,122 points in basketball while compiling the highest cumulative GPA between 1989 and 1993.

Her numerous honors included Most Versatile Female, Most Outstanding Player and recipient of the Jesse Chavis Outstanding Sports Leadership Award in 1993.

Hunter garnered All-CIAA honors three seasons and helped the Panthers win the 1969 and 1971 CIAA golf titles. The 1971 squad was VUU’s last to win the CIAA championship until 2019.

•Ralph “Pete” Hunter: The Atlantic City, N.J., native is among the last Panthers to take their game from Hovey Field to the NFL. Hunter enjoyed a six-season NFL career with the Dallas Cowboys, the New York Jets, the Cleveland Browns and the Seattle Seahawks.

Playing under Coach Willard Bailey at VUU, Hunter helped the Panthers to the CIAA championship in 2001. As a senior, he led the CIAA with 11 interceptions, while also blocking six kicks and recording 50 tackles.

•Jacqie McWilliams: Now in her ninth season as CIAA Commissioner, McWilliams was the first VUU volleyball coach in 1994 and also served as an assistant men’s basketball coach under Coach Dave Robbins.

She started her career in coaching, compliance and administration at VUU. She is the CIAA’s first female commissioner and the first appointed African-American commissioner representing NCAA Division I, II and III.

•Dr. S. Dallas Simmons: The late Dr. Simmons served as VUU president from 1985 to 1999. He is credited with outstanding fiscal management and building the university’s endowment. During his 14-year tenure, he initiated VUU’s criminal justice program, restored several campus facilities and built a new library. During his presidency, VUU won its second NCAA basketball title in 1992.

•Rob Timmons: He was a rare two-sport athlete in football and golf, playing from 1986 to 1991. As the Panthers’ place kicker, Timmons accounted for 234 points on field goals (21) and extra points. That places him third on VUU’s all-time scoring chart.