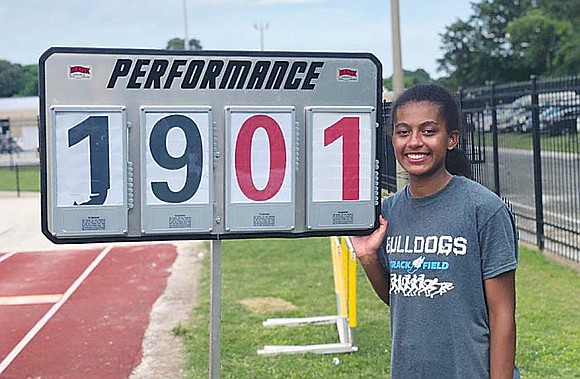 She also excelled in hurdles and sprints and was named LoCo (Loudoun County) Track and Field Athlete of Year.

Since then, she has won the USA Track & Field Region 3 Junior Olympics with an 18-foot, 3-inch leap July 8 at Hampton University.

Next up for the 5-foot-11 athlete is the Junior Olympics Nationals from July 23 through 29 in Greensboro, N.C.

A straight-A student, she is being recruited by schools such as of Virginia, Virginia Tech, Nebraska and Miami (Fla.).

Barnes, a Northern Virginia resident much of his adult life, averaged 6 points and 5 rebounds for the 1975-76 Rams in Coach Noe’s final season.

Between Walker (where he was second-team All Metro) and VCU, Barnes helped Western Texas College to the 1975 National Junior College title.

Daughter Natalie also played basketball at Stone Bridge through her sophomore season before opting to focus on track.