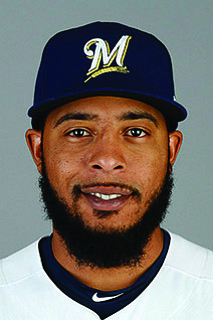 Virginia Union University hasn’t had baseball for many decades, but it does have family ties to a current big league star.

Jeremy Jeffress, pitcher for the Milwaukee Brewers and member of the National League All-Stars team, is the brother of former VUU basketball player Racquel Jeffress. Racquel Jeffress started for the Lady Panthers in the early 2000s.

Jeffress, 30, made the NL All-Star roster on the strength of a 6-1 record and 1.17 earned-run average and 49 strikeouts in 46.1 innings. He is among the game’s hardest throwers, with an average fastball of 96 mph during his career.

Both Racquel and Jeremey went to Halifax High School near South Boston. He was the leading scorer on the Halifax High basketball team.

Jeremy was the Milwaukee Brewers’ first round draft choice —16th pick overall — in 2006.

He is among the highest drafted African-Americans ever out of Virginia.

Outfielder Justin Upton, from Great Bridge High School in Chesapeake, was picked first overall in the 2005 MLB draft by the Arizona Diamondbacks.