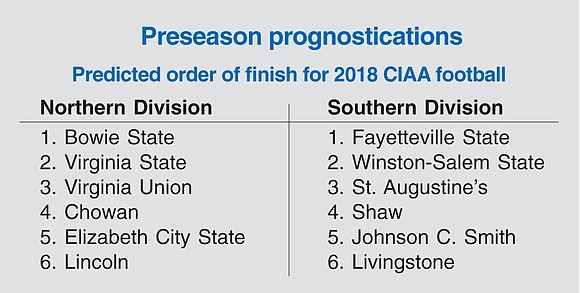 The CIAA has gazed into its crystal ball and sees the Bowie State University Bulldogs as the 2018 football champion.

Depite the CIAA issuing a forecast each year, no one will knows which team will win the title until the official championship game is played Nov. 10 in Salem.

The VSU Trojans were 10-1 last season and are 19-3 overall in two seasons under Coach Reggie Barlow. The team’s only 2017 loss was to the University of West Georgia in the NCAA Division II playoffs.

The VUU Panthers were 6-4 a year ago and will open their first season under new Coach Alvin Parker.

Bowie State will be led by senior quarterback Amir Hill, the reigning National Black College Player of the Year.

VUU will open the Coach Parker era Sept. 1 against Seton Hill University of Pennsylvania at 1 p.m. at Hovey Field. VSU also opens Sept. 1 against Norfolk State University at Dick Price Stadium in Norfolk at 6 p.m. in the Labor Day Classic.