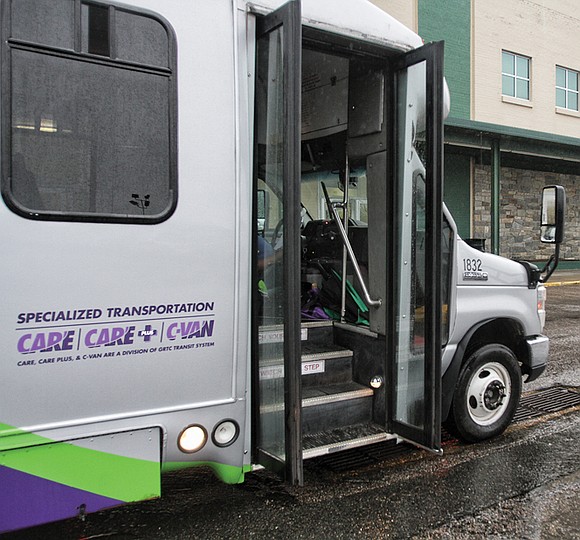 Union drivers who provide door-to-door service for the elderly and disabled on the area’s CARE vans have rejected a new contract that lacked the wage increases and improvements they sought.

But instead of striking, the drivers are continuing to work under a contract that expired in December while calling for new talks with First Transit, the contractor that GRTC hired last year to operate the specialty transit program, according to their union representative.

“We don’t want to disrupt this service,” said Frank Tunstall III, president and business agent for Local 1220 of the Amalgamated Transit Union, which represents GRTC bus drivers as well as the CARE van drivers.

“Right now, we want the company to come back to the table and take part in negotiations for a satisfactory contract,” he said.

At this point, no new talks have been scheduled, Mr. Tunstall said.

Officials from First Transit could not immediately be reached for comment. GRTC is not directly involved and does not comment on negotiations between CARE van drivers and the company.

The drivers’ July 18 vote to reject First Transit’s contract came just a few weeks after the union and GRTC agreed on a new three-year contract to improve conditions and wages for the workers who drive Pulse and other transit buses.

First Transit had offered to boost wages between $1 and $1.15 an hour for CARE van drivers in the proposed contract, the Free Press was told. The drivers rejected the increase as too small.

Drivers have continued to work under the terms of the old contract while seeking to negotiate a new one that includes what the drivers consider a living wage, as well as a pay scale that rewards drivers based on the length of time on the job.

Starting pay for new CARE drivers is $12 an hour, with top pay at $13.55 an hour under the expired contract.

That is well below the $14 per hour starting pay for school bus drivers in Richmond, as well as for regular GRTC bus drivers, whose pay ranges from $14.72 an hour to $22.64 an hour, Mr. Tunstall noted.

According to published data, First Transit built its bid to GRTC on paying CARE van drivers an average of $19.17 an hour in its first year, with increases built in each additional year. By paying drivers less and by having at least one in five positions vacant, the company has tripled its projected profit from about 6 percent of total expenses to 18 percent.

Mr. Tunstall said the No. 1 issue for the CARE van drivers is the failure of First Transit, like past CARE contractors, to create a salary scale like the one GRTC has for regular drivers. Such a scale ensures drivers after one or two years would make more than new drivers and would continue to receive increases as their length of service increases until the maximum is reached.

He said the compression of wages — where veteran drivers make the same as newcomers — is hurting morale and encouraging longtime drivers to leave for better pay elsewhere.

“There has never been a full complement,” he said, “and that affects the service.”

He said it is not easy to recruit new drivers, who are not required to have a commercial driver’s license, but must have a virtually perfect driving record with five or more good driving points.

“Most of our drivers enjoy the work, which involves helping elderly and disabled people,” he said. “They want to do a good job. They deserve to be properly paid and to have a pay scale that rewards them for continuing to stay on the job. Instead, a situation is created that encourages people to leave once they have a little experience.”