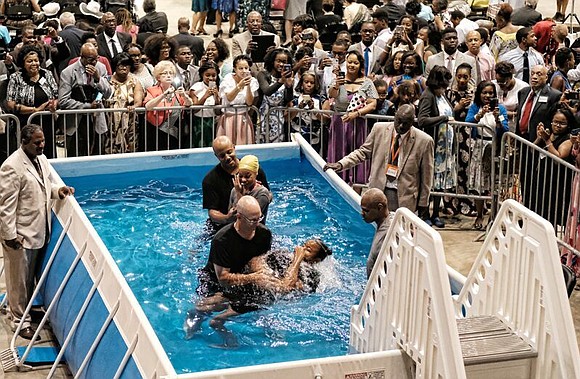 As national and world events cause polarization and despair, there’s a need for individuals to have a source of release and a positive outlook for the future.

The Jehovah’s Witnesses plan to address the issues in a series of weekend conventions through August in Richmond.

This year’s theme: “Be Courageous!”

The conventions, which began last Friday, will continue Friday June 29, through Sunday, Aug. 5, at the Greater Richmond Convention Center in Downtown. It is the first time the annual conventions will be held at this venue.

Thousands of religious followers and visitors from Virginia, North Carolina, Washington, Maryland and Delaware are expected to attend the three-day conventions.

Each day, the morning and afternoon sessions will be introduced by music videos prepared specifically for the convention. Speakers, symposia, music, prayer and Bible lessons will center around the theme. Baptisms will be performed on Saturdays. Additionally, a feature film, “The Story of Jonah — A Lesson in Courage and Mercy,” will be shown on the convention’s final day.

The conventions, which are free and open to the public, will be held:

A convention in American Sign Language also will be held Friday, Aug. 3, through Sunday, Aug. 5, at the Assembly Hall of Jehovah’s Witnesses, 5607 Midlothian Turnpike.