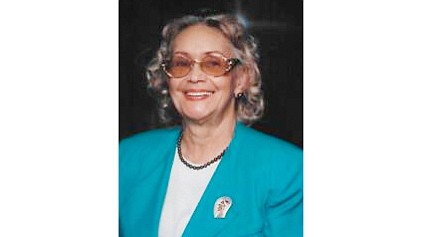 Mrs. Wallace was involved as a teacher in creating the school system’s Book Bowl to promote reading and setting up a program to encourage students to write their own books and then read from them to school audiences.

Outside the classroom, she participated in civic-minded women’s groups and also found time to be a Realtor. She was involved in selling properties for 30 years and also owned and managed up to 10 properties of her own.

Her life was celebrated Wednesday, May 9, at St. Paul Catholic Church in North Side.

Ahead of the funeral, the Richmond Alumnae Chapter of Delta Sigma Theta Sorority held an Omega Omega Service Tuesday evening at Scott’s Chapel, followed by a memorial service of the Richmond Chapter of Continental Societies Inc.

“She was an amazing person,” said her niece, Honor Benson. “She was a model of accomplishment. She was sweet, but she hated wasting time and sought to get things done.”

A graduate of Armstrong High School, Mrs. Wallace began her career in education after graduating in 1949 from Virginia Union University. She first taught elementary grades in segregated schools. She later was reassigned to Westhampton Elementary School, becoming one of the first African-American teachers to teach at a school for white children.

After earning a master’s degree at Northwestern University, she became a reading specialist for Richmond Public Schools, later adding an endorsement for teaching reading to children with disabilities. She helped create a model remedial reading program that was installed in all of the city’s elementary schools.

She continued as a reading specialist until retiring in 1993 after 44 years with the school system.

For a time, she also operated a children’s tour program to provide adventures and experiences for young people traveling to other Virginia communities.

Mrs. Wallace also worked the polls in Henrico County as an election official.

A longtime member of the Richmond Alumnae Chapter of Delta Sigma Theta, she also was a life member of the national NAACP and held memberships with the Southern Poverty Law Center and the National Council of Negro Women.

She also was among the founders of the Richmond Chapter of the Continental Societies Inc. and served as president of the chapter, working on behalf of underprivileged and disadvantaged children.

In addition to her son and niece, survivors include her brother, Calvin Marx Winfree Sr.; a grandson; and a great-grandson.