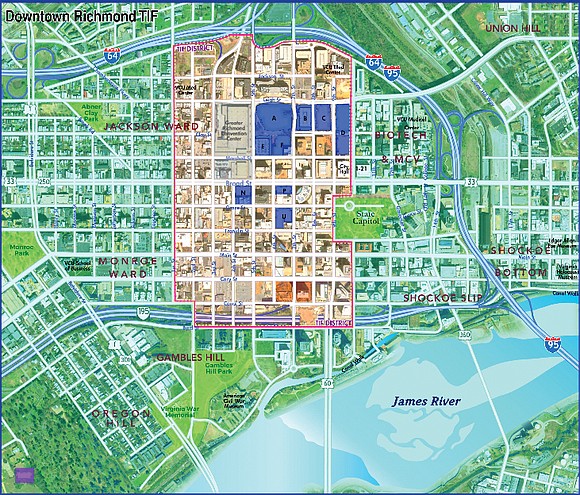 This map shows the 80 block section of Downtown to be included in a proposed Tax Increment Financing, or TIF, District. Increased earnings from real estate taxes within the district would be used to pay off $350 million in borrowing for a new Coliseum and other public projects, including elevating the portion of Leigh Street around the Coliseum and reopening 6th Street to traffic. The proposed boundaries for the TIF district are the Downtown Expressway, 1st Street, 10th Street and Interstate 64/95. Projections are for the area to generate $1.1 billion in additional real estate taxes, as well as $600 million in increased sales, lodging and other city taxes, over 30 years. The TIF district is eight times larger than originally proposed. The blue-color blocks represent sites where the new Coliseum, a new convention hotel, restaurants, office buildings and about 3,000 apartments would be erected. Hunden Strategic Partners

This property in the 4700 block of Jefferson Davis Highway, at the intersection of Walmsley Boulevard in South Side, is the site where Mayor Levar M. Stoney wants to relocate the city Department of Social Services, according to three members of City Council who attended a Oct. 29 briefing. The department is now located at 9th and Marshall streets across from City Hall. But that property is earmarked for redevelopment into a building with 457 apartments and space for a grocery store.

The grand plan to overhaul a big chunk of Downtown — including replacing the Richmond Coliseum with a new, larger arena — with a combination of taxpayer dollars and private investment funds is now headed to Richmond City Council for review.

Mayor Levar M. Stoney last week enthusiastically rolled out the ambitious plan to completely redo about 13 blocks near City Hall over the next five years with a projected investment of $1.4 billion.

The plan would change the face of an area that once was an African-American neighborhood known as Navy Hill, create hundreds of new affordable apartments, provide black-owned and minority companies with hundreds of millions of dollars in new contracts and generate thousands of new jobs to help lift untold Richmond residents out of poverty.

Over the next 30 years, the development is projected to create $1.7 billion in new city taxes. But in the first 18 years, the lion’s share would need to be used to repay $350 million in city borrowing.

One result is that the development would sideline any prospect for modernizing the majority of Richmond’s public school buildings for at least 20 more years, according to information the city released to the media.

And it would force the relocation of the centrally located Richmond Department of Social Services building that now sits across the street from City Hall. The mayor and his staff are proposing to move Social Services to a privately owned location at Jefferson Davis Highway and Walmsley Boulevard close to the border with Chesterfield County, nearly nine miles away in South Side.

• Leigh Street brought up to grade between 6th and 8th streets.

Privately financed by investors and lenders

• Two large office buildings, with one at 5th Street next to new Coliseum, and one to be leased by Virginia Commonwealth University to fill most of space occupied by Public Safety Building.

• Retail space in eight apartment buildings for restaurants and other stores.