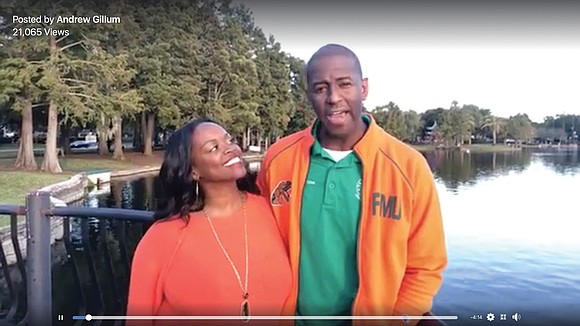 Democrat Andrew Gillum, who had sought to become Florida’s first African-American governor, conceded last Saturday after a recount showed he had no way of catching his Republican rival Ron DeSantis, an ally of President Donald Trump.

Mr. Gillum, the 39-year-old mayor of Tallahassee, initially conceded the race on the night of the Nov. 6 election to Mr. DeSantis, a conservative former congressman. But Mr. Gillum later withdrew that concession when the results showed the two were close enough to trigger an automatic recount.

“This has been the journey of our lives. We’ve been so honored by the support that we’ve received,” Mr. Gillum said in a video statement. “Stay tuned, there will be more to come. This fight for Florida continues.”

Mr. DeSantis, 40, said on Saturday on Twitter, “This was a hard-fought campaign. Now it’s time to bring Florida together.”

After a machine recount ended on Nov. 15, official results showed Mr. DeSantis with a lead of 33,683, or 0.41 percent. That margin appeared impossible for Mr. Gillum to overcome by last Saturday.

“We wanted to make sure that every single vote including those that were undervotes, overvotes, as long as it was a legally cast vote we wanted those votes to be counted,” Mr. Gillum said in his video statement.

His stance echoed similar appeals from fellow Democrat U.S. Senator Bill Nelson. Numerous legal challenges were filed in Florida over how to deal with certain ballots and the deadlines for counties to review them.

Both parties and their supporters filed multiple lawsuits challenging the process, with Republicans urging a strict standard on which votes were counted while Democrats contested rules that they saw as disenfranchising voters.

The drama of counties across the state recounting ballots brought back memories of Florida’s 2000 presidential recount. In that election, the winner of the White House hung in the balance for weeks before the U.S. Supreme Court stopped the counting and Republican George W. Bush triumphed over Democrat Al Gore.