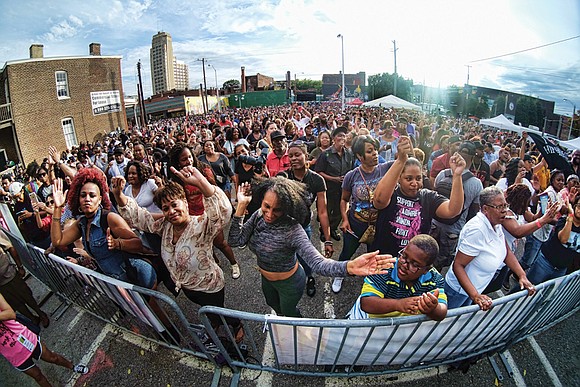 The Art of Noise, Sunday’s final act at this year’s 2nd Street Festival, brings the noise and the people Downtown to party in a parking lot between 1st and 2nd streets for the 29th edition of this annual celebration of the former “Harlem of the South.” Photo by Sandra Sellars

Thousands of people are expected to take to the streets of Jackson Ward this weekend to enjoy the history, music, food and art of the 30th Annual 2nd Street Festival.

Free music and entertainment will be featured on four stages in the festival area that spans four city blocks that will be closed to vehicle traffic from 1st to 3rd streets between Broad and Jackson streets during the two-day event.

The free festival, produced by Venture Richmond Events, will kick off 11:15 a.m. Saturday, Oct. 6, with the L. Douglas Wilder Middle School Drumline on the Waverly B. Crawley Main Stage, followed at noon by students from Minds in Motion on the Eggleston Hotel Community Stage and Marsha Meekins & Company on the Joe Kennedy Jr. Jazz Stage. At 12:30 p.m., the Fitness Warriors will open on Nina’s Bistro Stage.

The festival continues through 7 p.m. Saturday, and reopens from noon to 6 p.m. on Sunday, Oct. 7.

Musical headliners Stokley, the former lead singer of Mint Condition, will perform 5:30 p.m. Saturday, while The Art of Noise, with Heavy Hitter DJ Lonnie B and DJ Marc, will perform 4:30 p.m. Sunday.

Other performers during the festival include keyboardist Debo Dabney, comedian Antoine Scott, F.A.B.C. Music Ministry All Stars and dance and jump rope teams.

Historian Elvatrice Belsches will talk about 2nd Street’s illustrious history as the “Black Wall Street” and the “Harlem of the South” at 3:45 p.m. Sunday, while hourlong walking tours led by Gary Flowers will be available both days from the Maggie Walker National Historic Site at 2nd and Leigh streets.

Mr. Flowers also will lead a Renaissance Roll Call at 3:25 p.m. Saturday for fraternities, sororities and religious and benevolent organizations with connections to Jackson Ward. Participants are asked to wear uniforms, medallions and insignias for the event.

On Friday, Oct. 5, artist David Marion’s poster for the 30th anniversary of the festival will be unveiled. His art, along with other artists, will be featured on the festival’s Artists Row.

The Richmond Metropolitan Antique Car Club also will show off their cars, while food and vendor wares will be available in the festival’s marketplace.

The festival also will feature a Kidz Zone with balloon twisting and special programming.