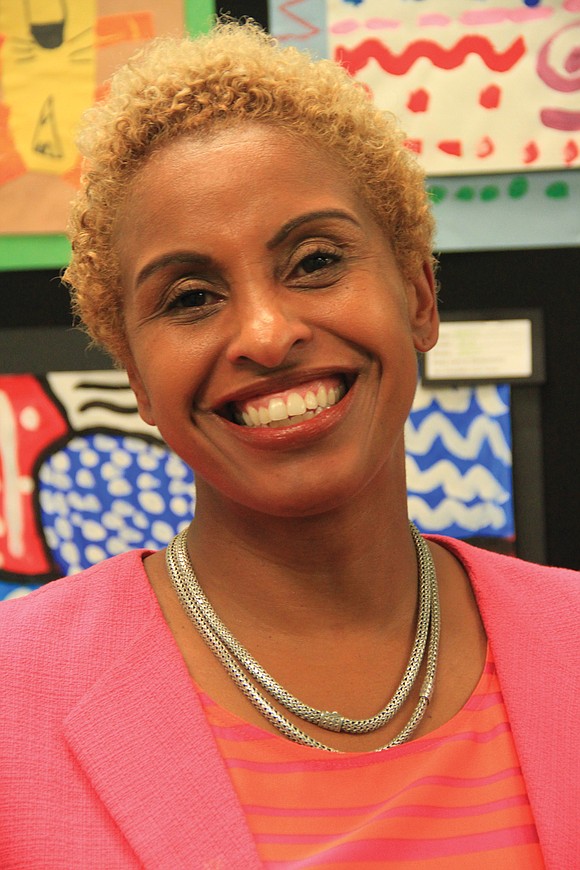 Monica Manns, director of the Office of Equity and Diversity for Henrico County Public Schools, plans to use information from recent public Listen and Learn sessions to draft a survey to be sent to all county households. Ronald E. Carrington Richmond Free Press

She pulls them from her shelf one after another — “Culturally Responsive Teaching & The Brain,” “What If? Short Stories to Spark Diversity Dialogue” and “The Brilliance of Black Boys.”

It’s necessary reading, she said, the kind that will change your life.

The questions the books raise harken to the questions Ms. Manns asked herself years ago, long before she headed up HCPS’s Office of Equity and Diversity.

Back then, part of her work involved student discipline in juvenile justice systems and schools in the Richmond region. Why, she remembers asking herself, were so many of those students African-American?

“Then I started asking questions about the system. I didn’t start out in equity work. But I consider it a calling. Equity work found me,” she said.

At 44, Ms. Manns is heading into her seventh month in the newly created position with Henrico schools, earning about $99,000 a year. She’s the sole person in the office, created last year in the wake of a heinous locker room cellphone video and racist caption posted on Snapchat showing white boys from Short Pump Middle School simulating sex acts on top of their African-American peers. The video made national headlines.

But Ms. Manns is quick to point out what many parents expressed in the weeks following the controversial situation. The video, they said, wasn’t an isolated incident, but part of a years-long pattern of unequal treatment of minority students within Henrico’s increasingly diverse school system.

A similar narrative emerged from parents during listening sessions Ms. Manns held during her first few months on the job.

“The No. 1 issue identified during the Listen and Learn sessions … was the perception of inequities between East End and West End schools,” a newsletter from Ms. Manns’ office states.

The social media video was the tip of the iceberg, Ms. Manns acknowledged.

“You hate to have a tragic event open ears. I think it was a reckoning of recognition,” she said.

“These are some of the systemic issues that have been going on for a long time,” Mr. Thornton said. “There are significant things that need to be done, and she’s a one-person office. She’s in the assessment and data-gathering phase right now. It remains to be seen how much autonomy she has.”

He questioned the level of “power and influence” Ms. Manns will be given and whether she will be given a staff that can help to address such critical problems in the schools.

Ms. Manns said it will take a willingness from local and state officials to move the needle in the right direction. Will the schools embrace her ideas for broadening recruitment efforts to attract more first-generation teachers and teachers of color? Will lawmakers put more money toward such efforts across the state? Will school leadership give her the ability to put new programs into the two newly announced replacement schools in Henrico’s East End? Will the Henrico School Board approve goals for Ms. Mann’s office to be crafted by a new equity committee?