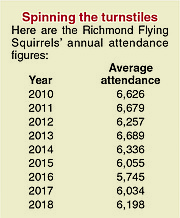 The Richmond Flying Squirrels finished last in victories but first in attendance for the 2018 Eastern League season.

The baseball team, under first-year Manager Willie Harris, drew a total of 396,686 fans with an average attendance of 6,198 for 64 dates at The Diamond.

The Reading Fightin Phils of Reading, Penn., was second in attendance with an average of 5,713 fans per game.

On the field, the Flying Squirrels were 62-76, last in the EL’s Western Division.

The Flying Squirrels are a Class AA affiliate of the major league San Francisco Giants. The team’s continued high attendance is a tribute to nightly promotions and a family-friendly environment at The Diamond dubbed “Funnville.”

It also helps that the Flying Squirrels draw from the EL’s largest market. Richmond’s metro population of about 1.26 million ranks 44th in the United States and has the largest population by far among EL affiliates.