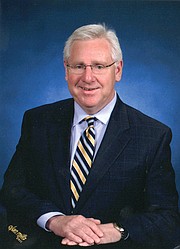 For the first time, members of historic Centenary United Methodist Church will have a booth at VA PrideFest 2018 to tell the church’s story and encourage the thousands of festival participants to attend.

Public participation in the annual festival celebrating the Richmond area’s lesbian, gay, bisexual, transgender and queer residents is another sign of the 208-year-old church’s embrace of its role as a Reconciling Congregation, according to the pastor, Dr. Matthew D. “Matt” Bates.

An Oklahoma native who has led the church since 2011, Dr. Bates said the 400-member church will mark its ninth year as a member of the Reconciling Ministries Network at its 8:40 and 11 a.m. services Sunday, Sept. 23. A reception will follow the 11 a.m. service.

The Reconciling Ministries Network is an unofficial movement within the United Methodist denomination. Membership means “means we have made a commitment to extend hospitality and encourage full participation” of everyone, regardless of race, sexual orientation or any other differences, Dr. Bates said.

The Rev. Patricia “Pat” Shipley will lead the service, Dr. Bates said. She led the congregation in 2009 when the agreement was made to join the network.

“Centenary has always been an open and welcoming congregation,” Rev. Shipley said. “In becoming a Reconciling Congregation, the people of Centenary have chosen to be up front and out front in declaring that God’s love is for all, no exceptions.

“In a world full of division,” Rev. Shipley continued, “identifying as a Reconciling Congregation is a sign that God’s love can break down barriers that separate us from one another.”

Dr. Bates also credits the congregation for the church striving to be a place where people have “open hearts, open minds and open doors.”

Congregant James Hill said that when he came out as a gay man, he found a supportive church family at Centenary.

“This is a place where people can worship and serve with a congregation committed to full inclusion and acceptance of all people,” he said.