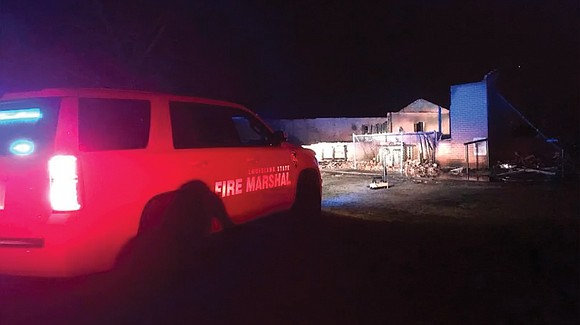 Investigators do an initial investigation at the scene of the fire on March 26 at St. Mary Baptist Church in Port Barre, La. Photo courtesy of Louisiana State Fire Marshal

The white man suspected in the burnings of three African-American churches in Louisiana will remain in jail, denied bond Monday by a judge, as state prosecutors added new charges declaring the arsons a hate crime.

Holden Matthews, 21, the son of a sheriff’s deputy who authorities say was influenced by the music genre “black metal” tied to organized hate, entered his not guilty plea via video conference from the St. Landry Parish jail. The judge set a September trial date.

“We felt that he was an immediate risk to public safety,” Louisiana Fire Marshal Butch Browning said. “In my mind, I felt another fire was imminent.”

Testifying in court, Mr. Browning outlined a litany of evidence, including some new details of the investigation, that he said tied Mr. Matthews to the torching of the three black churches over 10 days.

The fire marshal described cellphone records placing Mr. Matthews at the fire locations, and he said images on the phone showed all three churches burning before law enforcement arrived and showed Mr. Matthews “claiming responsibility” for the fires.

Mr. Matthews, shackled and wearing an orange prison jumpsuit, never spoke to the court during the hearing, letting his court-appointed lawyer enter the not guilty plea for him. His parents, St. Landry’s Parish Sheriff’s Deputy Roy Matthews and Angela Matthews, watched their son’s appearance on video conference from the courtroom, his dad repeatedly wringing his hands and, at one point, leaving the room in tears.

The fires, all started with gasoline, occurred in and around Opelousas, about 60 miles west of Louisiana’s capital city of Baton Rouge.

Mr. Matthews’ arrest came a little more than two weeks after the first blaze at the St. Mary Baptist Church on March 26 in Port Barre, a town just outside of Opelousas. Days later, the Greater Union Baptist Church and Mount Pleasant Baptist Church in Opelousas were burned. Each was more than 100 years old.

The churches were empty at the time, and no one was injured. But at one location, two occupants of a nearby home had to evacuate when the siding on the home started to catch fire from the church.

The fires set the community on edge. Gov. John Bel Edwards said the church burnings were a reminder “of a very dark past of intimidation and fear.”

Mr. Matthews’ attorney, Quincy Cawthorne, questioned some of the evidence cited by Mr. Browning and said Mr. Matthews didn’t have the financial means to be a flight risk. He also objected to suggestions that the house near one of the churches was intentionally set on fire, putting the residents’ lives in danger.

A pretrial hearing in the case was set for July 17, with jury selection scheduled to begin Sept. 10.

Through Mr. Browning’s testimony, prosecutors gave more insight into the evidence that law enforcement used to build their case against Mr. Matthews.

“He actually superimposed himself on those news reports, claiming responsibility for these fires,” Mr. Browning said.

In addition, Mr. Browning said video on Mr. Matthews’ phone showed a conversation with a friend before the fires in which he talked about burning churches and using gasoline to do it. The fire marshal said Mr. Matthews posted on Facebook about and showed interest in a movie called “Lords of Chaos,” which Mr. Browning said is a recent Norwegian film that involved church burnings.

Mr. Matthews had shown interest in “black metal,” an extreme subgenre of heavy metal, Mr. Browning said. The music has been linked, in some instances, to fires at Christian churches in Norway in the 1990s.

“The evidence we have was unequivocal,” Mr. Browning said. Later, he added, “He has clearly demonstrated the characteristics of a pathological fire setter.”