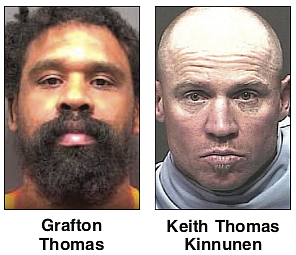 People across the nation were grappling with a spate of religious violence that struck at a rabbi’s New York home Saturday during a Hanukkah celebration and erupted at a North Texas church on Sunday.

The incidents, which resulted in the deaths of two people at West Freeway Church of Christ in White Settlement, Texas, outside of Fort Worth, are raising questions about security at churches and synagogues and whether arming congregants to subdue threats is the safest and best policy.

Federal prosecutors on Monday filed hate crime charges against Grafton Thomas, 38, who is accused of going on a stabbing rampage during a Hanukkah celebration at a rabbi’s home north of New York, saying the suspect kept journals containing references to Adolf Hitler and “Nazi Culture.”

The U.S. Attorney’s Office for the Southern District of New York filed the charges.

On Sunday, Mr. Thomas was arraigned on five counts of attempted murder in a state court in the town of Ramapo, N.Y. He is accused of stabbing five people on Saturday night with what the criminal complaint described as a “machete” after bursting into a Hanukkah celebration that included dozens of people at Rabbi Chaim Rottenberg’s home in Monsey, N.Y., about 30 miles north of New York. The town is in Rockland County, home to a large Orthodox Jewish community.

The suspect appeared in federal court in White Plains, N.Y., on Monday afternoon to face five counts of obstruction of free exercise of religious beliefs involving an attempt to kill and use of a dangerous weapon resulting in bodily harm.

Handwritten journals confiscated from the suspect’s home in Greenwood Lake, N.Y., contained anti-Semitic sentiments, including “referring to ‘Adolf Hitler’ and ‘Nazi culture’ ” as well as a drawing of a swastika, FBI agent Julie Brown said in the complaint. She said his cell phone was used to search “Why did Hitler hate the Jews” on Nov. 9, Dec. 3, Dec. 7 and Dec. 16.

Agent Brown also said the phone showed searches for Jewish temples in Elizabeth, N.J., and Staten Island, N.Y., both on Dec. 18, and for prominent American companies founded by Jews on Dec. 27.

The complaint identifies the victims of Saturday’s attack only by initials. Four of the five people stabbed were released after being treated at a local hospital. One was still hospitalized Tuesday with a skull fracture.

New York Gov. Andrew Cuomo denounced “a scourge of hate in this country.”

“Its ignorance is intolerance. But it’s also illegal. And it’s spreading,” Gov. Cuomo told CNN a day after calling the stabbing an act of domestic terrorism.

New York City Mayor Bill de Blasio pointed to a “national crisis of anti-Semitism” in an interview with MSNBC. Mr. Thomas’ family said through his attorney he had a long history of mental illness, no known history of anti-Semitism and no prior convictions. Late last week, New York’s police department said it was stepping up patrols in heavily Jewish neighborhoods. Commissioner Dermot Shea told a Sunday news conference the city had seen a 21 percent increase in anti-Semitic hate crimes in 2019.