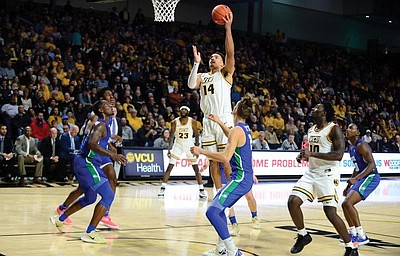 The brawny and surprisingly nimble 6-foot-7, 250-pound junior from Taunton, Mass., has become the Rams’ go-to man near the hoop.

Santos-Silva was the bright spot in a pair of nail-biting VCU losses to big-time programs during the Emerald Coast Classic Nov. 29 and 30 in Destin, Fla. He had 19 points in the 59-56 loss to Purdue University and 22 points in the 72-69 setback to the University of Tennessee.

He’s also a powerful pillar defensively, combining strength and smarts. Through eight games, he had 10 blocked shots and 14 steals.

Rams fans have become accustomed to stellar play on the low post since the program entered the NCAA Division I in the early 1970s.

Here’s a look back at some notable centers/ power forwards:

Martin Henlan (6-foot-10, 1987-90): A two-year starter, the Englishman set a school rebounding record in VCU’s loss to Indiana University in the Hoosier Classic.

Sherron Mills (6-foot-9, 1991-93): Averaged 15 points as a senior and was drafted as the second pick in the second round by the NBA Minnesota Timberwolves.

Which brings us to Santos-Silva.

VCU hasn’t suffered a losing season in the 21st century. The Rams have been to 11 NCAA tournaments since 2004 and six more prior to 2000.

Those are some big numbers. It took some big men to achieve them.

VCU leads the series 50-44 since 1968. However, the schools began playing one another in the late 1940s, when VCU was Richmond Professional Institute and ODU was the Norfolk Division of the College of William & Mary.