If a vote were taken today for CIAA Player of the Year, Virginia Union University basketball player Terrell Leach would be a leading candidate. 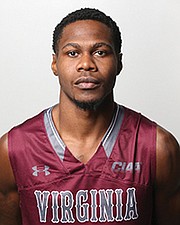 The Panthers senior guard has been a catalyst in VUU’s six-game winning streak. The Panthers were 8-4 overall and 2-0 in the CIAA entering the holidays.

Wearing jersey No. 0, Leach can give as well as receive. He’s fifth in assists (2.8 per game). He also excels defensively with 1.8 steals per game, while averaging 2.8 rebounds.

He’s long on talent and also long on breath. Leach is fourth in the CIAA in minutes played (33.9).

Leach, 25, was rated among North Carolina’s top high school players when he first signed with Winston-Salem State University in 2013.

After a season and a half at Winston-Salem (averaging 13.5 points for 48 games), he dropped out of college to take a job assembling bus seats in Thomasville, N.C.

Leach was lured out of hoops “retirement” last winter by VUU Coach Jay Butler. Leach led the team with 21-point average in 18 games a year ago.

Despite an early-season ankle injury, he has been VUU’s top scorer nine times, with highs of 31 points against East Stroudsburg University of Pennsylvania and 30 points against Shepherd University in West Virginia.

Virginia State University has benefited from having an All-CIAA center the past three years, and don’t be surprised if it happens again.

The names change but not the production. 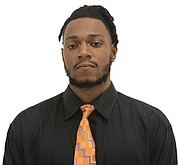 From Middleburg Academy in Northern Virginia, the broad-shouldered, 6-foot-7 Corum averages 12 points and nine rebounds while hitting 57 percent from the field.

While Granberry and Howze were transfers, Corum signed with Coach Blow out of high school after leading Middleburg to the State Independent Schools’ title at VSU’s Daniel Gymnasium.

Middleburg is famous for its big men. Another alumnus is former Virginia Commonwealth University center Mo Alie-Cox, who is now playing tight end for the NFL Indianapolis Colts.

The Trojans are making history as they defend their CIAA title of a year ago.

The senior was fourth in the NCAA Division I in scoring (24.9 points) when he broke the thumb on his right hand Nov. 23 at Illinois. He has missed the last seven games and Hampton is now 4-8.

The Pirates are hoping Marrow will be back Saturday, Jan. 4, for the Pirates’ Big South home opener against Charleston Southern University.

These are hard times at Norfolk State University, but 6-foot-7 sophomore Chris Ford is making a difference coming off the Spartans’ bench.