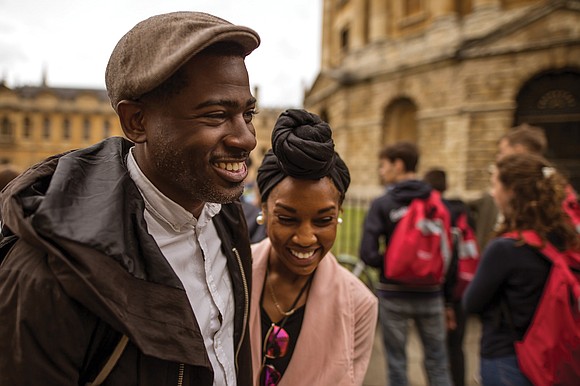 Born in Norfolk, and raised by a single mother, I felt a special responsibility to go to college but, at first, I failed at it — quite literally. But I turned my life around and see a pathway to success. Studying in London as a Frederick Douglass Global Fellow was instrumental in healing my wounds and making me whole again.

First enrolled as a college student at Liberty University in Lynchburg, I left school my freshman year because it wasn’t a good fit for me. A year later, I transferred near home to a historically black college, Norfolk State University, but I abruptly left during my second semester when tragedy struck in a way that I couldn’t have imagined.

In a scuffle on campus, one of my friends, Sean Williams, was tragically stabbed to death. Like me, Sean was a classically trained vocalist. I was in such shock from his murder, I left school and didn’t even tell my teachers why.

I moved to Florida, where I fell in love and was blessed to have a son. I wanted to make a positive future for my son, but I really didn’t know how. I thought about it long and hard and decided I wanted to be a lawyer in arts and entertainment. I knew I needed to be in New York City. I knew I had to go back to school.

I got my transcripts. I put myself in a suit and put myself on a bus and, transcripts in hand, I went to the headquarters of City University of New York, CUNY.

The admissions counselor opened up my transcripts and said, “Uhhhh….”

“These are the grades I have,” I told him. “I’m willing to start completely over.”

He said, “It’s going to be competitive,” but handed me a list of schools and I returned to Florida.

But I went back and wanted to attend the first school on the list, LaGuardia Community College in Queens, N.Y.

I told her, “If I had known when I was just young what I know now, I would have done things differently. I just didn’t know. Unfortunately, this is what happened. I plan on being a lawyer.”

She asked, “You want to be a lawyer?”

I responded, “I will be a lawyer.”

She arched her eyebrows and said, “I like the way that you said that.”

She told me what I needed to do to be admitted: Take a math and English entrance exam. I passed English, but failed math by two points. I took a remedial math course, passed and was admitted. I learned I loved math and started tutoring other students. I earned my associate degree in legal studies and received an invitation to join the President’s Society for students with excellent academic records. That’s right, I was invited. When I received the Frederick Douglass Fellowship, I called my mother to share the good news.