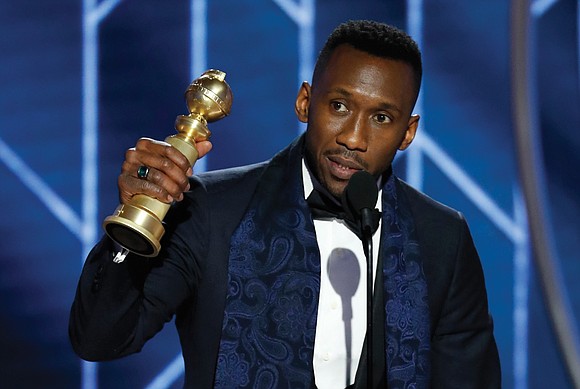 Mahershala Ali pays homage to the late pianist Don Shirley, the man he portrayed in “Green Book,” during his remarks accepting the Golden Globe Award for best supporting actor in the film. Paul Drinkwater/NBC Universal/handout via Reuters

Regina King beams with joy at winning the Golden Globe for best supporting actress for her role in “If Beale Street Could Talk” during Sunday night’s ceremony in Beverly Hills, Calif.

Golden Globe Award presenters, from left, Chadwick Boseman, Danai Gurira, Lupita Nyoung’o and Michael B. Jordan give the “Wakanda salute” from their box office hit “Black Panther” during the Sunday ceremony. The film and several of the actors were nominated for awards, but went home empty-handed.

“Green Book,” the film about the segregation-era concert tour of a black jazz pianist and his white chauffeur to the South, took top honors Sunday night at the annual Golden Globe Awards show.

At a raucous, three-hour-plus dinner gala marked by words being bleeped from several awardees’ acceptance speeches because of the NBC television audience, the film directed by Peter Farrelly claimed three honors awarded by the Hollywood Foreign Press Association, despite the controversy it has ignited from the family of Don Shirley, the late musician it portrayed.

Critics have said the movie does a disservice to Mr. Shirley and his family with its inclusion of several fallacies about Mr. Shirley’s life and connection to his blackness. Mr. Ali also reportedly contacted the Shirley family to apologize.

During his acceptance speech Sunday night, Mr. Ali called Mr. Shirley “a brilliant man,” adding that the “dignity with which he carried himself inspired me every day.”

But it was only during his meeting with the media afterward that he addressed the backlash.

“I will say this,” Mr. Ali told reporters, “my job is always the same. I have to look at what I am doing and be responsible for it.

“I respect the family … and Don Shirley,” he said. “I spoke to the studio and the family and, at the end of the day, you wish everyone was happy and you don’t want to offend anyone in any capacity.”

This year’s slate of Golden Globe nominees was one of the more diverse in its 76-year history in an industry that traditionally has been difficult to break into by people of color.

Several performers of color won in some of the most prestigious categories. Among them was Regina King, who won best supporting actress for her role in “If Beale Street Could Talk.”

During her acceptance speech, she pledged that she would insist that at least 50 percent of the cast and crew on future projects she produces be women.

Egyptian-American Rami Malek won best actor in a drama for his role as Freddie Mercury in the Queen biopic “Bohemian Rhapsody,” which also won the Golden Globe for best drama.

Darren Criss gave a shout-out to his Filipino mom when he won best actor in a miniseries or motion picture made for television for his role in “The Assassination of Gianni Versace: American Crime Story.”

“This has been a marvelous year for representation in Hollywood and I am so enormously proud to be a teeny, tiny part of that as the son of a firecracker Filipino woman from Cebu that dreamed of coming to this country and getting to be invited to cool parties like this,” he gushed.

The award for best animated movie went to “Spider-Man: Into the Spider-Verse,” in which a version of the superhero is an Afro-Latino teenager. The directing team behind the movie included African-American filmmaker Peter Ramsey.

Sandra Oh, who made history as the event’s first Asian host, also won a Golden Globe for best actress in a television drama as the star of the BBC America series “Killing Eve.”

She talked about the diverse slate of nominees in her opening with co-host Andy Samberg: “I said yes to the fear of being on this stage tonight because I wanted to be here to look out into this audience and witness this moment of change,” she said. “Next year could be different … but right now, this moment is real.”

Ben Whishaw, an openly gay actor, won a Golden Globe for his acting in the Amazon miniseries “A Very British Scandal.”

Among the night’s surprises: The film “A Star Is Born,” which was nominated in several categories, including best drama, and its star, Lady Gaga, was nominated for best actress in a drama, won a single Golden Globe for best original song, “Shallow.”

Veteran actress Glenn Close won best actress in a drama for her leading role in “The Wife.”

In tearfully accepting the award, she talked about the need of women to grow into their own. She spoke of her mother, “who really sublimated herself to my father her whole life,” she said.

“Women, we’re nurturers. We have our children, we have our husbands … but we have to find personal fulfillment,” Ms. Close said as women in the audience jumped to their feet with applause. “We have to follow our dreams. We have to say, ‘I can do that and I should be allowed to do that.’ ”

A number of movies — “Black Panther,” “BlacKkKlansman,” “Mary Poppins Returns,” “Boy Erased,” “Can You Ever Forgive Me?” — went home empty-handed despite each receiving multiple nominations.