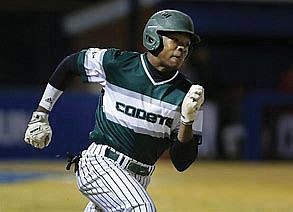 Jamari Baylor is about to become a wealthy teenager.

Baylor was selected by the Phillies on June 4 in the third round of the Major League Baseball draft. He was the 91st pick overall.

MLB suggests signing bonuses based on the slot taken in the draft. The suggested bonus for the 91st pick is $647,300, although it can vary.

The 5-foot-11, 190-pound Baylor likely will launch his pro career with the Advanced Class A Clearwater Threshers of the Florida State League.

If successful, the next rung up the Phils’ minor league ladder would be the Class AA Reading Fightin’ Phils of Reading, Penn., in the Eastern League. That would set up possible homecomings at The Diamond against the Richmond Flying Squirrels.

Baylor hit .412, with seven homers and 21 runs batted in, this past spring in helping Benedictine to the Virginia Independent Schools state title.

Had the draft not gone so well, Baylor likely would have enrolled at Louisburg College in North Carolina.

Baylor shines in all areas. In addition to his hitting and smooth glove, he has run the 60-yard dash in 6.59 seconds at Perfect Game showcases and has been timed throwing a baseball at 92 mph.

The Phillies haven’t decided what position he will focus on professionally. He also could play second base or move to the outfield.

Philadelphia’s first round and overall 14th pick also was a shortstop, Bryson Scott from the University of Nevada-Las Vegas.

Baylor won’t be Benedictine’s first baseball standout to go pro. Former Cadet Granny Hamner was a big league infielder from 1944 to 1962. Frank Carpin pitched in the majors in 1965 and 1966.

Also infielder Tracy Woodson played big league ball from 1987 to 1993 and was a member of the Los Angeles Dodgers’ 1988 World Series champions.

Tom Lukish pitched in the minor leagues from 1980 to 1984, advancing as high as the AAA Syracuse Chiefs.