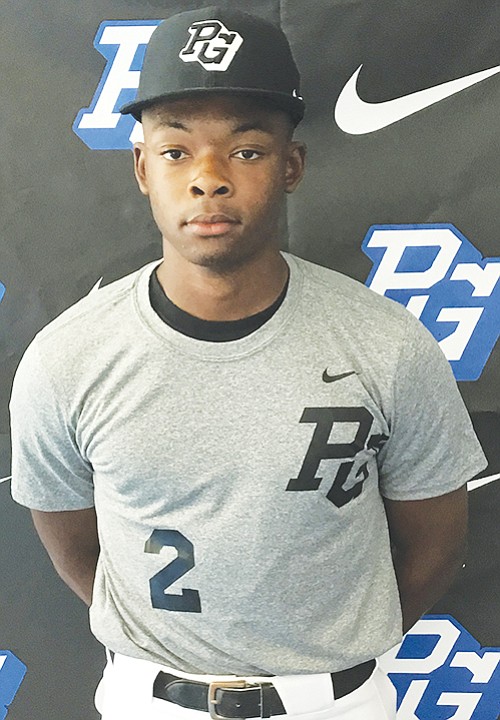 Two physical assets baseball players covet most are power at the plate and speed on the base paths.

Jamari Baylor has a high supply of both.

The senior at Benedictine College Preparatory is a rare blend of home runs and stolen bases, not to mention his smooth glove and rocket arm at shortstop.

“Jamari is very, very special,” says Cadets’ Coach Sean Ryan. “He has really taken off as a prospect.”

Baylor, nicknamed “Five” to match his jersey number, is high on confidence as well as talent.

“I like to get on base and let the other guys drive me in. Or if you need power, I can hit for power,” he said.

The tag “Five” also matches his “tool” box. In baseball lingo, a “five tool player” is one who can hit, hit for power, run, throw and field.

Coach Ryan expects a flock of college and pro scouts to visit the Goochland campus during Baylor’s senior season.

Baylor is coming off a brilliant junior season in which he won All-Metro and All-State honors, while spurring Benedictine to a 24-3 record.

At the military school some 17 miles west of Richmond, Baylor delivered a steady drum beat of hits, eight of which left the park.

It helps that the tightly muscled 6-foot, 190-pound Baylor has been clocked at a breezy 6.59 seconds for the 60-yard dash, baseball’s standard measuring distance.

He also excels in another measuring barometer — miles per hour. His fastball has been radar timed as high as 92 mph.

“My primary position is shortstop, but if you need someone to pitch, I’ll hop on the bump (mound),” he said.

The right-hander’s long-ball power is largely to right centerfield, or what he calls the “back side.”

The son of Crystal Allen, Baylor grew up in Caroline County and credits his early athletic training to his grandfather, Ellis Allen.

“That’s who got me started in baseball, football and soccer,” said Baylor. “In fact, my middle name is Ellis, like his.”

While Baylor excelled in all sports, baseball emerged as his main focus.

“I loved football but I loved baseball more,” he said.

This is Baylor’s second season at Benedictine. He transferred to the rural campus from Deep Run High School in Western Henrico County. A key reason for the change was to re-classify—in Baylor’s case, repeating 11th grade. The move helped him mature both physically and academically.

With an Aug. 25 birthday, Baylor would have finished high school at 17. As it is, he’ll be 18 his entire senior season.

“It really helped me, re-classing,” he said. “I’ve grown a lot in the last year, at least a couple inches, gotten stronger. In fact, I never hit a home run until this past spring.”

Baylor plays for the nationally recognized Virginia Cardinals during the offseason. Baylor’s travels included a trip to the Perfect Game National Showcase in Tampa, Fla., where he sparkled.

“After that, I started getting lots of calls,” he said.

He attended a University of North Carolina camp but is more likely to enroll at a two-year college if higher education is in his future.

Baseball players can be drafted out of high school and it’s not unreasonable to think he’ll have his name called in the June 2019 draft.

“We’ve had some outstanding players at Benedictine who’ve gone on to play Division I in college,” Coach Ryan said. “But we’ve never really had a pro prospect. It would be neat to see pro scouts in our stands next season.”