Virginia voters and candidates now can have full confidence in the boundaries of the redrawn House of Delegate districts ahead of the Nov. 5 general election to fill the 100 seats.

In a 5-4 decision Monday, the U.S. Supreme Court upheld the House district boundary lines that a lower court had redrawn earlier this year to eliminate the illegal packing of African-American voters into 11 districts, reducing their influence in adjacent districts.

The revised district map was used in the June 11 primary elections to choose candidates in 17 House districts.

The high court’s decision will keep the map intact until district lines are redrawn in 2021 following the U.S. Census next year.

The court’s majority included conservative Justice Clarence Thomas, the high court’s lone African-American, in dismissing a challenge to the redrawn map mounted by the Virginia House’s Republican majority. The GOP appealed the lower court’s decision out of concern Republicans could lose seats in the House if the revised map is used.

The high court’s decision drew cheers from Virginia Attorney General Mark R. Herring, who refused to challenge the court decision. Mr. Herring, along with the federal government and the House Democratic Caucus, had urged the Supreme Court to throw out the Republican lawsuit.

“This is a win for voting rights and civil rights in our commonwealth,” Northern Virginia Delegates Eileen Filler-Corn, the House Democratic leader, and Charniele Herring, House Caucus chair, stated in a joint release.

Republican House Speaker Kirk Cox of Colonial Heights expressed disappointment that the dismissal would prevent the House’s case from being heard on the merits. 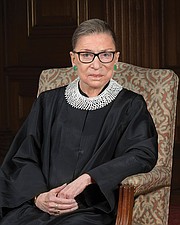 Justice Ruth Bader Ginsburg, writing for the majority, stated that the Virginia House of Delegates lacked authority to represent the state or the General Assembly’s interest and had not suffered the kind of specific injury needed to mount its own challenge.

She stated that a single house of a bicameral legislature that also includes a state senate cannot in general pretend to speak for the state, and even more so in this case.

“The House has not identified any legal basis for its claimed authority to litigate on the state’s behalf,” Justice Ginsburg wrote, noting that under Virginia law, “authority and responsibility for representing the state’s interests in civil litigation rest exclusively with the state’s attorney general,” currently Mr. Herring, a Democrat.

Justice Ginsburg also stated that the House could not argue that the change in the redistricting map created the kind of harms that would allow a challenge.

“The House as an institution has no … interest in the identity of its members,” and thus suffers no injury from the imposition of a redistricting plan that “may affect the membership of the chamber,” she wrote.

“Instead, it is a representative body composed of members chosen by the people. Changes to its membership brought about by the voting public cannot be considered an injury to the body or to the legislation it might enact,” she continued.

The four dissenters who found the House had suffered sufficient injury to pursue a challenge were Justices Samuel A. Alito Jr., who wrote the minority opinion, Stephen G. Breyer, and Brett M. Kavanaugh and Chief Justice John G. Roberts Jr.

In a separate decision, the court also rejected a private company’s effort to overturn Virginia’s ban on mining for uranium, most notably in rural Pittsylvania County.