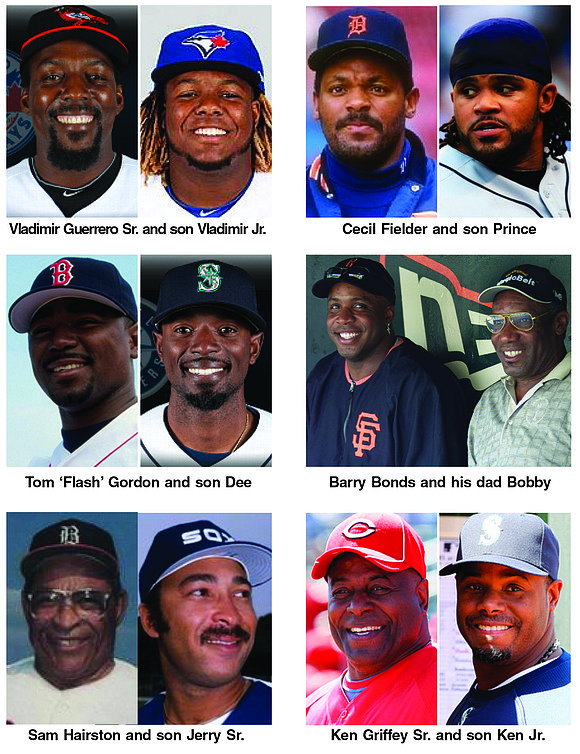 Baseball has been said to be a “daddy’s game.”

Find a talented player and, more often than not, you’ll find a father or strong father figure closely linked to the youngster’s success.

It’s that caring adult who bought the child his first glove, pitched to him in the backyard, signed him up for Little League and took him to his first big league game.

Rarely does success happen by accident.

Keeping that in mind as we head into the warm weather of the National Pastime, here are some shining father-son examples on the highest level.

Now at age 20, Vladimir Jr. will try and chase his dad’s Hall of Fame slugging numbers.

Vladimir Guerrero Jr. and Vladimir Sr. represents baseball’s most talked about second generation act. There’s much to live up to.

Vladimir Sr., a native of the Dominican Republic, was a nine-time American League All-Star, American League MVP in 2004 and a 2018 inductee into the Baseball Hall of Fame.

Vladimir Jr., born in Montreal when his dad was starring with the Montreal Expos, is among the most talked about players in the game. After tearing up the minors — including a stint last summer for the AA New Hampshire Fisher Cats when he played against the Richmond Flying Squirrels — the younger Guerrero was called up to the Toronto Blue Jays on April 26 from the AAA Buffalo Bisons.

In his first game, with his dad watching from the press box, Vladimir Jr. socked a game-deciding double in a Toronto win.

An infielder now with the Seattle Mariners, Devaris “Dee” Gordon ranks with the fastest men in the game. He has 316 career stolen bases and led the AL in hitting in 2015 with a .333 average.

When Dee was 8, his mother was shot and killed. Dee was raised by his dad and his dad’s mother.

Sam Hairston played many years in the Negro Leagues before making it to the “bigs” in 1951 with the Boston White Sox. His name would live on and on.

The elder Fielder, a big league first baseman from 1985 to 1998, was among the most feared hitters in the game. He helped the Detroit Tigers to the1996 World Series title, twice led the AL in homers and three times in RBIs.

At a young age, Cecil converted Prince from a right-handed hitter to a lefty, believing it would enhance his career. It did.

Prince was a regular around the Detroit clubhouse and, at age 12, walloped a pre-game blast into the Tiger Stadium upper deck off Tigers third base Coach Terry Francona in 1996.

Now get this: Cecil Fielder had a career total of 319 homers. Prince’s career total was the same, 319. Like father, like son.

While overshadowed by Mays, Bobby slugged 332 home runs and was a three-time All-Star in a career dating from 1968 to 1981.

Barry grew up in California and starred at Arizona State University before moving on to re-write the big league record books with the Pittsburgh Pirates and, eventually, with his dad’s team, the San Francisco Giants.

While Bobby is linked to Mays, Barry is in the same sentence with Hank Aaron. In 2007, Bonds swatted his 756th home run, passing Aaron on the all time list.

Barry’s career total of 762 “dingers” is tops among everyone who ever played the game.

The elder Griffey was a key component of the Cincinnati Reds’ “Big Red Machine” in the mid-1970s.

Ever present around the Reds’ clubhouse during that era was Griffey Jr., aka “The Kid.”

Griffey Sr. was a big leaguer from 1973 to 1991 and enjoyed an illustrious career. He was a three-time All-Star and member of the 1975 and 1976 World Series champions.

Outdoing his dad, “The Kid” was a 13-time All-Star and 10-time Golden Glove winner while clubbing 630 homers — the sixth most of all time.

There have been others and there will be more.

Just think: The next time you spot a father pitching balls with his son in the neighborhood, you just might be seeing the next Griffey or Guerrero in the making.

Among baseball people, it’s agreed that “it all starts in the backyard.”