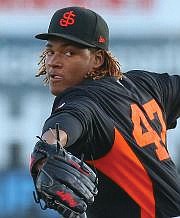 Walking to the batter’s box to face Melvin Adon must feel like walking the plank.

The 24-year-old right-hander from Santo Domingo, Dominican Republic, is a fully-fledged frat brother in the select “Triple Digit Society.” That means he has hit or surpassed 100 mph with a pitch often too hot to handle by rival hitters.

In each of the last three seasons, Adon has been named to Baseball America’s list of confirmed hurlers reaching 100 mph on TrackMan Baseball, an evaluating device used by all major and minor league squads.

“Melvin’s consistently 98 to 100 (mph), and has been as high as 102” mph, said Trey Wilson, the Flying Squirrels’ director of communications and broadcasting.

“You really can’t go by the stadium radar” located in centerfield at The Diamond, he said. “It’s wildly inconsistent. TrackMan is the official way pitching speed and other statistics, such as spin rate (of pitching) and launch angle (of batted balls)” is determined.

Since being converted from starter to reliever by the San Francisco Giants parent club, Adon has emerged as a full-fledged, big league prospect.

Adon and leftfielder Chris Shaw are the lone Squirrels on the Giants’ 40-man roster.

“My goal is to keep improving, make adjustments and get to San Francisco — hopefully this season,” Adon told the Free Press through interpreter and coach Eliezer Zambrano.

Known as the “original Squirrel,” Zambrano was a catcher for the Squirrels from 2010 to 2017 and now serves as bullpen coach, where handling Adon’s special deliveries is part of the job assignment.

“Melvin’s got one of the best fastballs I’ve ever caught,” Zambrano said. “It’s not just fast, but heavy.”

Adon’s secondary pitches need polish. His two-seam fastball — he calls it a “sinker” — and change-up require some fine tuning.

Squirrels manager Willie Harris and pitching Coach Glenn Dishman are bringing Adon along cautiously in his first season of AA baseball. Through the team’s first 34 games this season, he has made 10 relief appearances, posting a 1.80 earned run average with 19 strikeouts in 15 innings.

Signed in 2015, this is Adon’s fifth pro season. He started 62 of his 69 appearances before joining the Flying Squirrels. He struck out 277 batters in the lower minors, but his 14-22 record and 4.36 ERA were beneath expectations, thus, the move to the bullpen this past fall.

Quickly, his status took on a brighter glow. He was named to the Arizona Fall League All-Prospect Team and Fall League Rising Star. He is now the San Francisco Giants’ 15th top overall prospect.

Adon’s name could be short for “Adonis.” The 6-foot-4, 235-pound Adon has broad shoulders and narrow hips. He has more the look of a heavyweight boxer and NFL middle linebacker than a baseball hurler.

If he’d been born anywhere but Santo Domingo, he might have chosen another sport over baseball. But in his Caribbean homeland, baseball rules.

“It has always been baseball for me,” Adon said. “Baseball is the No. 1 sport in the Dominican Republic,” he said.

It shows. There were about 80 Dominicans on big league rosters starting this season and hundreds more in the minors. And there’s plenty room for more.

In Adon’s case, he’s hopeful his fastball is his ticket all the way to San Francisco.