RPS rezoning plans with pairings criticized as too costly 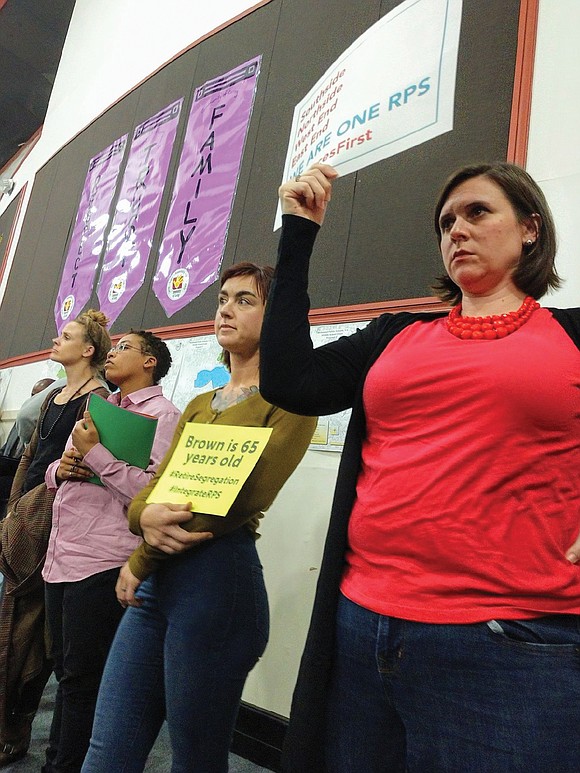 Parents hold signs at the Richmond school rezoning public hearing Monday night at Bellevue Elementary School signifying their support for school integration and diversity, along with a desire that the money needed to pair schools to achieve diversity be used to boost student instruction. Ronald E. Carrington

Parents and community members voiced opposition to several proposals to rezone Richmond Public Schools attendance districts, saying the plans are too costly and diversity in schools can be achieved in other ways.

More than 250 people attended Monday night’s public hearing before the Richmond School Board that was held at Bellevue Elementary School in Church Hill. The school auditorium was crowded, with 68 people speaking during the hearing.

Under scrutiny are four rezoning proposals that would alter school boundaries in time for the 2020-21 academic year, with two of the plans pairing elementary schools to achieve student diversity and equity.

Richmond Public Schools has about 24,000 students, 75 percent of whom are African-American, 12.8 percent are Hispanic, 9 percent are Caucasian and 1 percent are Asian.

Plan X includes the most extensive pairing of elementary schools, including Cary and Fox; Carver and Mary Munford; and Holton, Ginter Park and Barack Obama.

Plan Z would pair only Cary and Mary Munford, while redrawing attendance zones in South Side and the East End.

Plan W addresses overcrowding in South Side and redraws lines to accommodate the three new schools that are to open in fall 2020 — a new E.H.S. Greene Elementary and a new middle school in South Side, and a new George Mason Elementary in the East End.

Plan Y redraws lines in all parts of the city, but does not include school pairings.

The majority of speakers Monday night, along with those in the audience, expressed support for more diversity within Richmond Public Schools, but said there are better and less costly ways to accomplish that goal.

Such changes, along with a better open enrollment policy, would provide stable and sustainable diversity and equity throughout all the city schools, they said.

“The best way to integrate our school is to improve programming,” said Matt Wilson, an RPS parent. “School pairing is not the best way to integrate our schools because it would more than likely harm than help academic achievement by putting everyone in academic and personal transi- tions. This would discourage middle class families from choosing RPS.”

Nicole Thompson, who has a young child she would like to enroll in RPS, said, “Take the millions of dollars for pairing and get the South Side students out of trailers and give more money to schools in the East End.”

A majority of the audience seemed to support Plan W to address school over-crowding in South Side.

The School Board is expected to vote on a rezoning plan following a final public hearing at 6:30 p.m. Monday, Dec. 2, at E.S.H. Greene Elementary School, 1745 Catalina Drive.