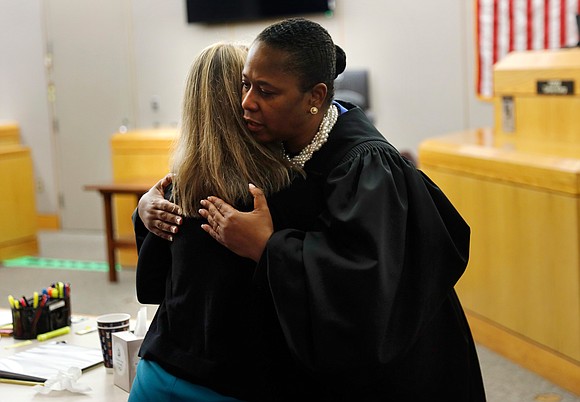 When a white Dallas police officer who killed an innocent African-American man in his own living room was sent off to prison last week with a hug from the victim’s brother and the African-American judge on the case, some saw it as a moment of amazing grace and redemption. 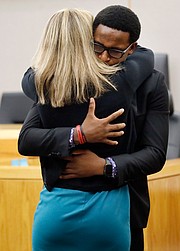 Brandt Jean, 18, hugs Amber Guyger, the former Dallas police officer convicted of murder in the death of his older brother, Botham Jean. The two embraced after he delivered his impact statement during the trial’s sentencing phase.

Many African-Americans, though, saw something all too familiar and were offended.

Some saw the rush to forgive as a rush to forget racial violence. They argued that the gesture of forgiveness took the focus off the crime and made it all about the white woman. They complained, too, that it served to soothe white people’s conscience.

And they said that white America has practically come to expect African-Americans to forgive when violence is done to them. Too often, they said, the public acts as if African-Americans are not entitled to express anger, even when there is ample reason to be upset.

“Very few communities in our nation have had to suffer as much as black people, who have also been robbed of the opportunity to emote from that experience,” said the Rev. Michael Waters, pastor of Joy Tabernacle African Methodist Episcopal Church in Dallas who has pushed for police reform in the city.

“It’s about removing from black people the agency of their anger, suggesting that we don’t have a right to righteous indignation, that it is somehow unacceptable for Christian black people to tap into their frustration at a death-dealing system that has caused them to bury generations of their sons and daughters,” he continued. “I think that’s sinful.”

For many, the scene during Amber Guyger’s sentencing Oct. 2 for murder recalled the extraordinary forbearance shown after the pastor and eight worshippers were shot to death at a historic African-American

church in Charleston, S.C., by a 21-year-old racist white man, Dylann Roof, in 2015. Within days, several relatives of the victims expressed their forgiveness for Mr. Roof and were widely praised across the United States for doing so.

The Rev. Sharon Risher, whose mother, Ethel Lee Lance, was killed in the attack, was not among those who immediately forgave the killer.

“It always seems like black people are given that heavy task of being able to forgive,” Rev. Risher said. The tendency to forgive, she said, is “part of a generational, DNA strand we have as black people,” a legacy of slavery. “For us to be able to live some kind of a decent existence and not carry rage and anger, we get to that point of having to forgive.”

Activists have complained, too, that when a black person is killed by police, political leaders almost always plead for calm from the black community.

Many African-Americans welcomed the rare guilty verdict in Ms. Guyger’s trial last week. The officer, who was fired soon after

the shooting, said she mistakenly walked into Botham Jean’s apartment, thinking it was hers, and opened fire on what she thought was a burglar. The 26-year-old accountant was sitting eating ice cream.

The trial and the sentencing featured Ms. Guyger’s tearful testimony, along with the disclosure she sent several offensive text messages about black people, and African-American character witnesses such as Ms. Guyger’s former colleague Cathy Odhiambo, who called the ex-officer “the sweetest person.”

But it was the sentencing last week, where Ms. Guyger got 10 years in prison, that was the most striking. Mr. Jean’s brother, Brandt Jean, forgave her in the courtroom and hugged her. Then Judge Tammy Kemp came down from the bench and gave the convicted killer an embrace, too, along with a Bible to take with her to prison.

Some black observers said that was too much and that anger is an appropriate response. Among them was activist Bree Newsome, who climbed a pole to take down a Confederate flag after the Charleston shootings.

“I have a right to feel how I feel as a black person in this country, knowing that I could be the next hashtag that launches a protest,” she said.