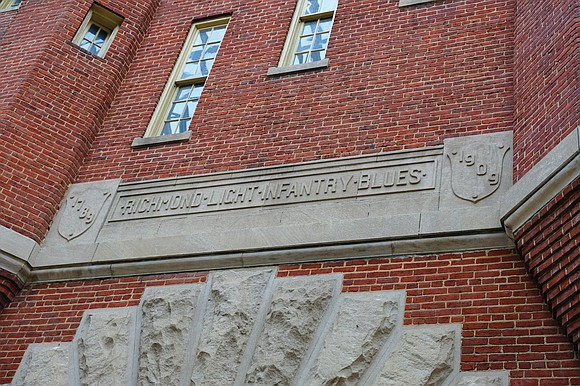 New plans are brewing for the historic Blues Armory at 6th and Marshall streets in Downtown as part of the Navy Hill District Corp.’s proposal to replace the closed Richmond Coliseum, located just north of the armory.

At an estimated cost of $10 million, a grocery store, jazz club and a hotel ballroom are envisioned for the three-story brick armory that dates to 1909 and was built initially to serve the whites-only Richmond Light Infantry Blues, a voluntary militia started in 1789. The unit became part of the Virginia Army National Guard and was deactivated in 1996.

The Navy Hill group, wants to buy the armory from the city as part of the Coliseum replacement and Downtown development plan. Navy Hill wants to tear down the modern glass-and-steel addition, top right, that was added onto the armory around 1984 as an entry to the former 6th Street Marketplace Food Court, bottom left, that closed in 2008.

A vision of the proposed renovation, right, sits in front of a hole in the wall that serves as an entryway into the armory.

Bobby Vincent, director of the city Department of Public Works, led a tour of the building last week for members of the media, including a Free Press photographer.

Navy Hill, though, has not shown why the Blues Armory project could not proceed without replacing the Coliseum. In the past 11 years, at least two developers have submitted proposals to overhaul the armory that the city rejected without explanation.

In the past two years, City Council allocated more than $250,000 to untangle ownership issues and enable the city to gain a clear title again to the Blues Armory.