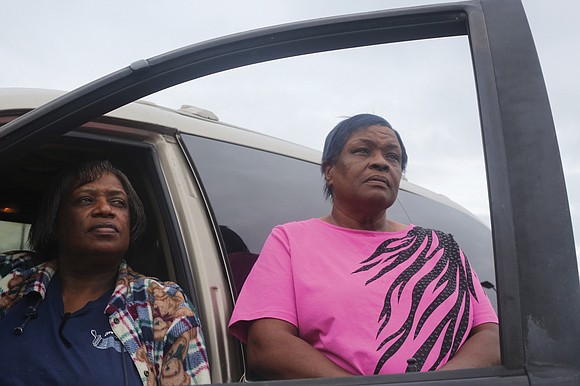 Janice F. Lewis, left, and her sister, Celieto L. Lewis, stand beside their vehicle, which now doubles as their bedroom. The sisters have been homeless since Aug. 23, when the house they were renting was condemned after a kitchen fire. Photo by Regina H. Boone

It just took a small fire on the stove on Aug. 23 to upend the lives of sisters Celieto L. and Janice F. Lewis.

Both in their 60s, they have few resources and are now homeless after their rented home in South Side was condemned after the fire.

Also caring for two grandchildren, a great-grandchild and a cat, their sleeping quarters is their vehicle, a 2002 Chrysler Town and Country SUV they cannot afford to replace.

Their tale of woe, unfortunately, is not unusual in a city where one in four people live in poverty and another 25 percent have household incomes below the city’s median of about $43,000 a year.

One of the biggest barriers to stability within families and in employment involves an unexpected event that creates unforeseen bills that overwhelm a household’s resources. It just takes the breakdown of a car, an injury, the illness of a child, a death in the family or another situation, according to workers for social services agencies and nonprofits who hear such stories every day from people desperate for assistance.

Neither the government nor nonprofits such as the Community Foundation, the United Way or area faith groups have created a fund to provide bailout money for people who have run through their money and do not have a backup plan to deal with emergencies.

Food pantries and clothes closets can assist with some of the problems families face, but sometimes people just need cash to resolve their difficulties.

The Lewises’ housing problem is compounded by other challenges, including the pregnancy of a granddaughter, who is about to give birth. The family’s landlord and property owner has not offered assistance and has not started repairs to the home in the 1400 block of Flynn Road, leaving the family to hunt for another place to live.

The fire has left the Lewis sisters hunting for another three-bedroom house for themselves and those they care for. They thought they had one, but on Tuesday that prospect fell through. So they continue to sleep in their vehicle as they keep searching for another place to live.

“Our biggest problem has been coming up with a security deposit. That’s on top of the rent. We’ve gone to Social Services, but they just referred us to other places. It’s just a run-around.”

For now, they have solved the problem of the security deposit. They have set aside money from their government checks from September to pay the deposit if they find another place.

Their hope is to start paying rent of around $900 a month, about half their monthly income, if they can move in October or later.

They admit that their situation would not be so bad if they had purchased a rental insurance policy to protect their possessions from fire loss and to pay for temporary housing if their place became uninhabitable. They are living with that decision.

Many who face tough challenges are like the Lewis sisters, who have always worked until they could not but never saved much.