‘Curly’ Neal, who added skill and laughs to the Harlem Globetrotters for more than 20 years, dies at 77 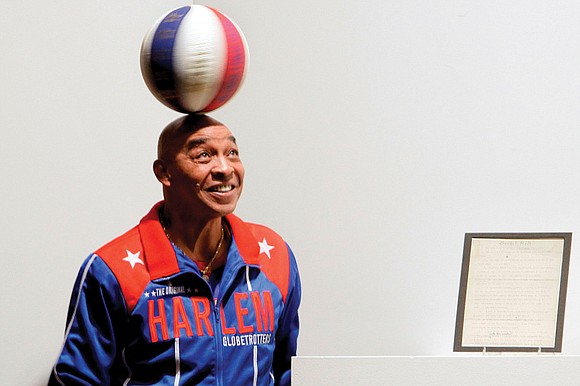 Many people felt Frederick “Curly” Neal was like a magician on the basketball court.

And his most dazzling trick of all— and one he never failed at—was putting glowing smiles on the faces of people of all ages.

Mr. Neal, who died Thursday, March 26, 2020, at his home near Houston, played for the Harlem Globetrotters from 1963 to 1985 as the comedic, touring squad’s featured dribbler and far-away shot artist. He was 77.

Famous for his shiny, bald head, Mr. Neal combined skill, humor and a sense of humanity to entertain fans in 97 countries, covering some 6,000 games.

Many times he appeared with the Globetrotters before awestruck fans at the Richmond Coliseum and, before that, the Richmond Arena.

The games were just good, old-fashioned family fun. No one ever asked for their money back after seeing Curly & Co., with the great Meadowlark Lemon, put on a show.

Tributes: “We lost one of the most genuine human beings the world has ever known.”—Jeff Munn, Globetrotters general manager.

“A great mentor, friend and teammate, he had the best smile in the world.”— former Globetrotter and Richmond native Clyde Austin.

“It’s hard to express how much joy Curly brought to my life growing up. RIP to a legend.”—Steve Kerr, coach of the Golden State Warriors.

“The world has lost a true ambassador of the game and, outside of Muhammad Ali, one of the most recognizable faces on the planet.”—Globetrotters teammate Boo Johnson.

Before the Globetrotters: Mr. Neal starred at Dudley High School in Greensboro, N.C., and then at Johnson C. Smith University in Charlotte, N.C. The 6-foot-1 guard earned All-CIAA honors at Johnson C. Smith, averaging 23 points as a senior.

Nickname: Mr. Neal began shaving his head in college. Someone with the Globetrotters joked that he looked like bald Curly Howard of Three Stooges fame. It stuck.

NBA?: Though undrafted out of college, Mr. Neal had tryout offers from the New York Knicks, the Detroit Pistons, the Baltimore Bullets and the St. Louis Hawks.

At the time, the NBA was majority white.

His other offer to tryout, held at DePaul University in Chicago, came from Globetrotters owner Abe Saperstein.

“I remember (the invitation) came on red, white and blue stationery,” Mr. Neal recalled. “There were 125 guys there and they only chose five. I was one of the lucky five.”

Local sighting: For a spell in the 1990s, Mr. Neal lived at St. John’s Woods apartments on Richmond’s South Side. He was known to show up, unannounced, for friendly pick-up games at the outdoor courts at Westover Hills Elementary School on Jahnke Road. In addition, he worked with kids at the Jewish Community Center in Richmond.

Double-deuce: Mr. Neal’s No. 22 jersey is one of only five to be retired by the Globetrotters. Others honored are Wilt Chamberlain, Marques Haynes, Meadowlark Lemon and Goose Tatum.

At least for a couple of hours, the most bigoted white men in America would be cheering for the black guys. Mr. Neal’s amazing talents and infectious smile won people over.

During the 1960s, long before there had been much integration of college and pro basketball, and before there was much on television, the Globetrotters were a Saturday regular on ABC’s Wide World of Sports.

Entertainer: Mr. Neal’s charisma extended far past the court. He appeared on “The Ed Sullivan Show,” “Gilligan’s Island” and “The Love Boat” and did voice-overs for Scooby-Doo movies. The Globetrotters also had their own show, “The Harlem Globetrotters Popcorn Machine.”

Personal note: In 1964, the Globetrotters came to Waynesboro High School in Virginia’s Shenandoah Valley. The tickets were $3, $4 and $5. My mother dug into her purse and bought me a $5 seat.

I don’t think I ever had so much fun as watching Curly Neal dribbling on his knees, sinking a half-court shot and performing to the beat of “Sweet Georgia Brown,” the most toe-tapping theme song of all time.

That $5 ticket turned out to be worth $5 million in memories. I still smile every time I think of it.