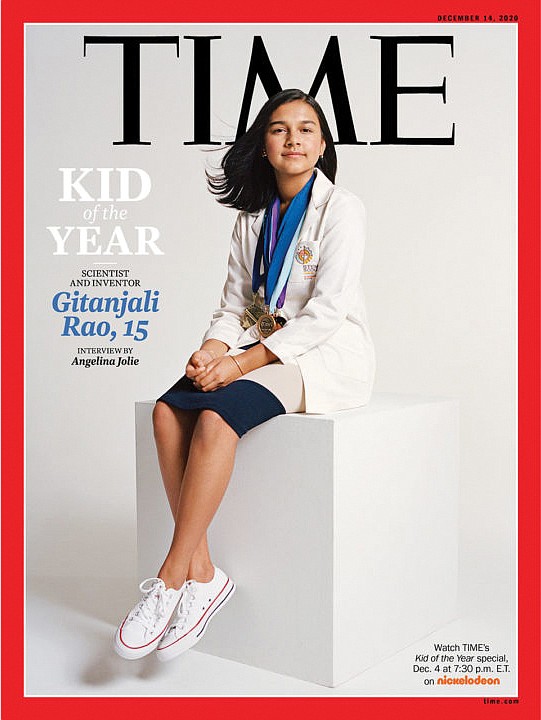 Gitanjali Rao is featured on the cover of TIME magazine. She was named TIME magazine’s and Nickelodeon’s first Kid of the Year.

A 15-year-old Colorado high school student and young scientist who has used artificial intelligence and created apps to tackle contaminated drinking water, cyberbullying, opioid addiction and other social problems has been named TIME magazine’s and Nickelodeon’s first Kid of the Year.

Gitanjali Rao’s selection from a field of more than 5,000 inspiring youngsters, including 13- year-old semifinalist Elijah Lee from Chesterfield County, was announced Dec. 4. She and the four other top finalists were featured Dec. 5 on a program hosted by comedian Trevor Noah that recognized extraordinary youngsters who are making a positive impact in their communities.

Each will receive a cash prize from Nickelodeon and have the opportunity to serve as a Kid Reporter for TIME for Kids.

Gitanjali also will be featured on the Dec. 14 cover of TIME magazine.

In a Zoom interview with actress, activist and TIME contributing editor Angelina Jolie, Gitanjali said her science pursuits started as a way to improve social conditions. The drinking water crisis in Flint, Mich., she said, inspired her to develop a way to detect contaminants and to send those results to a mobile phone.

Her goal, she told Ms. Jolie, has shifted to not only create devices to help solve the world’s problems, but to inspire others to do the same. From personal experience, she said, “It’s not easy when you don’t see anyone else who looks like you.”

“Everything I see on TV is that it’s an older, usually white man, as a scientist,” she said. “It’s weird to me that it was almost like people had assigned roles, regarding like their gender, their age, the color of their skin.” 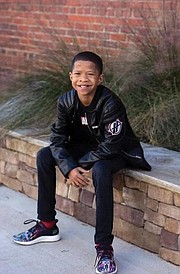 Elijah Lee from Chesterfield was a semifinalist.

Her message to other youngsters and teens: “If I can do it, you can do it, and anyone can do it.”

Elijah Lee, a seventh-grader at Swift Creek Middle School in Chesterfield, ordained minister and child advocate, was among the top 20 finalists.

In a Free Press interview this week, Elijah, who turned 13 on Dec. 5, said he met Gitanjali while working on his Marvel Hero Project. For his years of activism, he was honored with the designation of Marvel Hero on the Marvel Hero Project streaming on Disney Plus, episode 2, “Incredible Elijah.”

“I think (Gitanjali) is awesome,” Elijah said. “I am pleased that someone from my circle of friends is the first Kid of the Year. I was very, very proud of her. Because she rose to the top, we all rise.”

As he sees it, the program illustrates the need for all youngsters, regardless of age, “to push for their dreams. Keep trying,” he said. “It’s about the change each of us will make to our world. That is an award unto itself.”