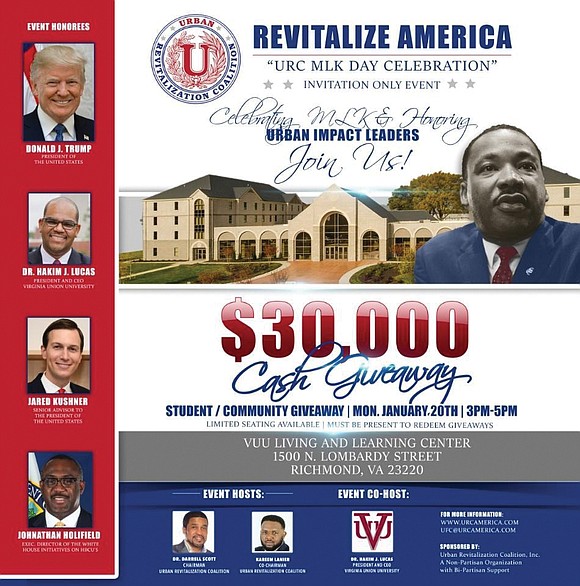 Dr. Richardson stressed those points during the interview, emphasizing that organizers “misrepresented” the event to university officials. He also stressed that the organizers had received “no authorization” to use Dr. Lucas’ photo or that of the university in publicizing the event. He said “nothing was put in writing” with the group. “There were no contracts,” he added.

“We cannot jeopardize the legacy of Virginia Union University and let people manipulate and use the imprimatur of the university” for their own ends, Dr. Richardson said.

He also said he learned Tuesday that “the White House heard of the event and (President Trump) decided he wanted to come. There had been some conversations about security, apparently, with the governor’s office. A person who was in charge of that was planning to come to campus” on Wednesday, he said. While Dr. Richardson said university officials try to stay out of politics, he responded when asked if the event was to be a Trump rally, “If he was coming, I guess that’s what it would have been.”

According to the university’s statement, VUU allowed the Urban Revitalization Coalition to reserve space “for what was described as an economic development discussion providing over $30,000 in cash giveaways to local residents to help stimulate economic and community development while celebrating the life and legacy of Dr. Martin Luther King Jr.”

A similar event with a $25,000 cash giveaway was held by URC on Dec. 14 in Cleveland, Ohio, where Mr. Scott and Mr. Lanier are from. Mr. Scott, pastor of New Spirit Revival Center in Cleveland Heights, and Mr. Lanier also hold leadership roles in the National Diversity Coalition for Trump. The NDC was founded before the 2016 presidential election by Mr. Scott and Michael D. Cohen, President Trump’s former personal lawyer and fixer.

Mr. Cohen is now serving time in a federal penitentiary for campaign finance violations, tax fraud and bank fraud in relation to payments made to Trump paramours Stormy Daniels, an adult film star and stripper, and Karen McDougal, a former Playboy model, from campaign funds that he said were directed by President Trump.

According to an article posted on cleveland.com, the Urban Revitalization Coalition, formed in 2019 by Mr. Scott and Mr. Lanier, has held events in other states, including Georgia and Florida, promoting parts of the White House’s legislative agenda targeted at urban communities.

A video posted on cleveland.com from the Dec. 14 event shows Mr. Scott and Mr. Lanier honoring various urban leaders, while extolling President Trump’s actions that they said have helped African-American communities. During that event, a woman excited to win $300 in the Cleveland giveaway shouted, “Four more years for President Trump!” as she waved the cash from the stage for the audience to see.

Dr. Richardson said when he talked with the event organizers on Tuesday, “they owned up to the fact that they didn’t tell us the truth.” But he said the representatives “didn’t own up to the flyer. They said they didn’t know who did the flyer.”

He said the decision to stop the event from being held on the VUU campus was immediate.

“To me, it was simple. I told them, ‘No, absolutely not.’ We were not going to have anything like that at VUU.”

He said while the university has “never encountered a problem like this before,” he said the board would review the university’s policy on allowing outside groups to hold events on the Brook Road campus.

Dr. Richardson also said he shared details of what he learned Tuesday with the VUU board and expects the trustees will have “an informal conversation” about the incident before its scheduled February meeting.