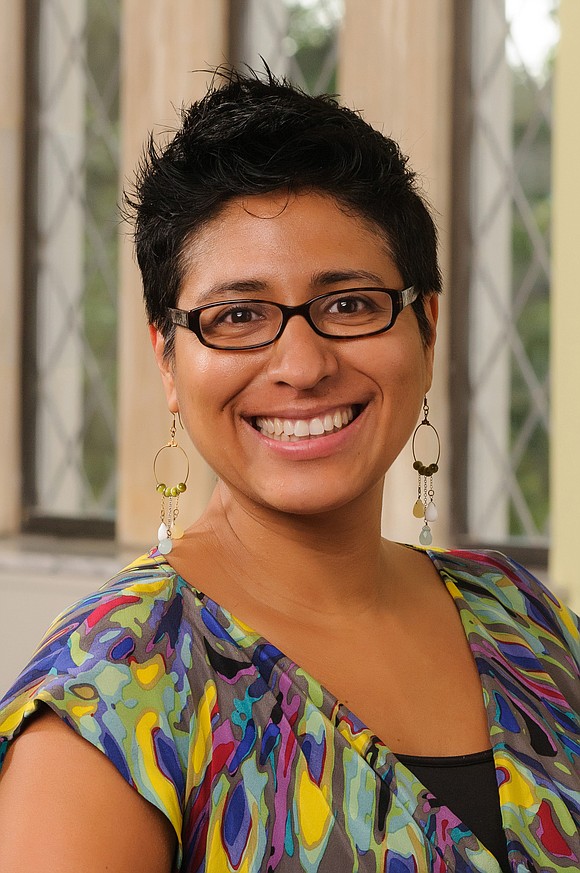 Dr. Patricia Herrera was in college when her sense of self was expanded.

The daughter of Ecuadorian immigrants, Dr. Herrera spent much of her early life with only a basic grasp of herself and her heritage’s power until reading several Latinx novels during her undergraduate studies at Dartmouth College.

Discovering “how transformative it was to read stories of your own community” greatly shifted Dr. Herrera’s view of herself and the world she lived in, and set her on the road to her current role as an associate professor of theater at the University of Richmond.

“That moment when you realize who you are in relationship to society is one that I aspire to cultivate in my students,” Dr. Herrera says.

The symposium, with an additional editorial forum, will bring together scholars from the United States and Canada “to explore how marginalized communities use and produce sound as a strategy of survival, resistance and radical world-making,” according to Dr. Herrera.

“This award gives me the opportunity to continue to work in a more intimate way with colleagues who are interested in pushing against the dominant historical narrative and unearthing histories that reveal the agentive nature of communities of color,” she says.

Dr. Herrera has been dedicated to this type of work for some time. She has collaborated for the last decade with UR Assistant English Professor Laura Browder, producing most recently a project called, “Civil Rights and Education in Richmond, Virginia: A Documentary Theater Project.” The two also have produced six documentary plays exploring topics and issues critical to the Commonwealth.

She views theater as “a vehicle for social change and social action,” with the classroom serving “as a laboratory to critically explore and examine the power dynamics in our ev- eryday life, including the social institutions we belong to.”

This semester Dr. Herrera is applying that methodology to two courses she is co-teaching, “Collaborative Arts Lab: Dance, Humanities and Technology” and “Gender, Race, and Performance Across the Americas.” Both courses seek to explore the experiences of the marginalized in relation to performance and representation using dance, theater and the examination of race, gender and sexuality, with a focus on local and worldwide issues.

She’s also preparing to co-edit the journal “Performance Matters” in November, which will include academic work supported by the symposium. Her first book, “Nuyorican Feminist Performances: From the Poets Café to Hip Hop Theater” is scheduled for release in May.

It’s a sizable slate for a single year, and it all speaks to the core motivations that underpin Dr. Herrera’s work, all sparked in part by books that spurred a life of raising social awareness through education and performance.

And “awareness,” as Dr. Herrera says, “must always start from within.”

What I do: I use the arts, specifically theater, movement and museum exhibition, to prompt difficult conversations.

Latest accomplishment: Recipient of the 2019 Collaborative Research Award from the American Society for Theatre Research. My book, “Nuyorican Feminist Performances: From the Poets Café to Hip Hop Theater,” will be coming out in mid-May.

Date and place of birth: March 2 in Brooklyn, N.Y., in the Crown Heights area.

Alma maters: Bachelor’s in theater and Spanish, with a concentration in Latinx Stud- ies, Dartmouth College, 1996; and a Ph.D. in theater studies, City University of New York, Graduate Center, 2007.

Family: I am the mother of three amazing children with a very supportive husband. My parents arrived in the United States from Ecuador 44 years ago.

Reaction to winning award: I am thrilled!

I decided to enter this competition because: We wanted to be in conversation with other scholars working at the intersection of sound studies, critical race studies and performance studies.

What this award means to me: This award gives me the opportunity to continue to work in a more intimate way with colleagues who are interested in pushing against the domi- nant historical narrative and unearthing histories that reveal the agentive nature of commu- nities of color. This award also supports the mentoring aspect of our upcoming symposium, “Revolutions in Sound,” as we will be providing extensive feedback to those involved.

Details of upcoming symposium: “Revolutions in Sound” is a symposium followed by an editorial workshop that will bring together scholars who explore how marginalized communities use and produce sound as a strategy of survival, resistance and radical world-making. It will take place Feb. 28 and 29 at the University of Maryland and will support the development of academic work that will be featured in the No- vember 2020 special issue of the journal “Performance Matters,” which I will co-edit.

How collaboration works: Collaborating with colleagues and community partners is intellectually and creatively stimulating. It opens my mind to different possibilities, deepening and expanding my understanding of the world we live in. For the last 10 years, I have collaborated with Laura Browder. We have engaged with the Greater Richmond community on a public humanities project entitled, “Civil Rights and Edu- cation in Richmond, Virginia: A Documentary Theater Project,” and have produced a series of six documentary plays, including the most recent performance, “Voices from Richmond’s Hidden Epidemic.” It is a docudrama based on oral histories of people living with HIV/AIDS, health care providers, activists and allies. This public humanity project has led to the creation of a digital archive, “The Fight for Knowledge,” as well as three community exhibitions at The Valentine — “Made in Church Hill” in 2015, “Nuestras Historias: Latinos in Richmond” in 2017 and “Voices from Richmond’s Hidden Epidemic,” which will open Thursday, Jan. 23. It offers a nuanced look at the HIV/AIDS crisis through the eyes of survivors, caregivers, activists and health care workers on the front lines. “Voices from Richmond’s Hidden Epidemic” features personal accounts from 30 individuals about their experiences with HIV/AIDS in Richmond. Each narrative, which appears on a panel below the black-and-white portrait taken by photographer Michael Simon, was collected by Ms. Browder and me. The exhibition also includes cascading books created with the guidance of Book Arts Studio Program Director Jen Thomas, and by members of a HIV/ AIDS support group from St. Paul’s Baptist Church, working alongside UR students.

Theater, for me, is: A vehicle for social change and social action.

Why I became a teacher: I did not read my first Latinx novel until I got to college and discovered how transformative it was to read stories of your own community. That moment when you realize who you are in relationship to society is one that I aspire to cultivate in my students.

Teaching philosophy: I use the classroom as a laboratory to critically explore and examine the power dynamics in our everyday life, including the social institutions we belong to. I use the time with my students to address social problems with views of social justice. Together, we explore how we can use the arts to raise awareness on topics such as AIDS/ HIV, gentrification, massive resistance, busing, segregation and the first black high school in Richmond — Armstrong. Awareness, however, must always start from within.

What is the relevance of using theater for social change to the growth and development of our youth: You are able to model how to be agents of social change.

How I start the day: My planner has two entries that I love doing in the morning: “What I am grateful for” and “What I am excited about.” It gets me started in a positive frame of mind.

A perfect day for me is: A beach day with my family.

How I unwind: There is noth- ing like a great yin yoga class — I always feel like I just got a massage — or a beautiful hike in the woods. Nature has a way of soothing the mind and soul.

At the top of my “to-do” list is: Travel. I’ve taken several cross-country trips with my family and have traveled to Ecuador, Cuba and South Africa.

Something I love to do that most people would never imagine: I like surrounding my space with plants and learning about the medicinal properties of different plants.

Best late-night snack: I love my chocolate or sweet dessert at night. Not a healthy choice but, oh, so comforting.

A quote that I am inspired by is: I’ve been re-engaging with Chicanx feminist Gloria Anzaldúa’s work and she has been on my mind. Here are three quotes that still resonate with me today:

• “A woman who writes has power, and a woman with power is feared.”

• “Wild tongues can’t be tamed, they can only be cut out.”

The best thing my parents ever taught me: My parents arrived in New York for their honeymoon and never left. They have been honeymooning for more than 40 years. They came to America to start a new life, to make their dreams come true. As a first generation, they passed on a legacy of hard work and discipline. Education was at the root of success and instilled a sense of curiosity and willing- ness to listen and learn.

The person who influenced me the most: My longtime mentor and friend, Tiffany Ana López. We meet more than 20 years ago at Dartmouth Col- lege. At the time, she was the first Cesar Chavez Dissertation Fellow and she was trying to finish her dissertation. I was a sophomore and just getting my feet wet in the world of theater. When she shared with me that she was working on Latinx theater, I was blown away. I didn’t know I could write about my culture and community. A whole new world opened up. A decade later, I returned to Dartmouth as the Cesar Chavez Dissertation Fellow.

The book that influenced me the most: “Sister Outsider: Es- says and Speeches” by Audre Lorde.

What I’m reading now: “Boys Will Be Men: Raising Our Sons for Courage, Caring and Com- munity” by Paul Kivel.

If I’ve learned one thing in life, it is: I feel at peace when I think and feel with my body, mind and soul. See the world not as it is, but as what it could be. Imagine the unimaginable.

My next goal: Turning the exhibition into a book project with my collaborator, Laura Browder, and planning my next cross-country road trip.