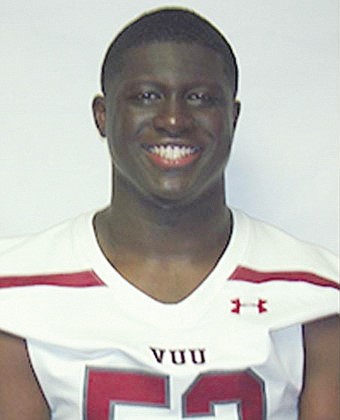 Emmanuel Antwi was No. 53 on the football field and No. 1 in the classroom at Virginia Union University.

Few combine brains with brawn more than Antwi, a senior from Woodbridge who earned co-valedictorian honors with a perfect 4.0 GPA.

He shares top academic honors at VUU with Kyra J. Spaights of Syracuse, N.Y., who majored in biology and aspires to become a physician. Ms. Spaights will be continuing her education at the University of South Florida.

“Emmanuel is a model student-athlete,” said Panthers football Coach Alvin Parker. “The distinction of being valedictorian is an accomplishment very few have achieved. I guarantee he will go far in life because he has what it takes to be successful.”

Antwi completed his bachelor’s degree with a concentration in history and political science. He is taking a gap year and plans to pursue a law degree at Howard University School of Law.

“Emmanuel is the type of student that comes along once in a lifetime. He is a true leader in the classroom, on the field and with organizations such as the SAAC,” or Student Athlete Advisory Committee, said VUU Athletic Director Felicia Johnson. “We are proud to say he is a student-athlete and has made a difference on our campus.”

Antwi is listed at 6-foot-1 and a muscular 230 pounds. He came to VUU from C.D. Hylton High School in Woodbridge. He wore No. 53 for the Panthers and was known for his speed and pass-rushing skills.

“There are so many memories that are special to me since I first stepped foot on campus,” said Antwi. “I’ve gained lifelong friends, (been) granted countless networking opportunities and acquired mentors whose lessons I will carry for the rest of my life.”

In addition to playing football and making straight A’s in class, Antwi seems to have invented the “48-hour day.” His extensive extracurricular activities included duties as community liaison for the SAAC. He was a member of the Honda Campus All-Star Team, VUU College African-American Men Mentor, the Pre-Law Honor Society and Pi Sigma Alpha Political Science Honor Society.

His talents weren’t confined to campus. During the 2020 General Assembly session, Antwi interned with the Virginia Legislative Black Caucus under Delegate Jeff Bourne of Richmond.