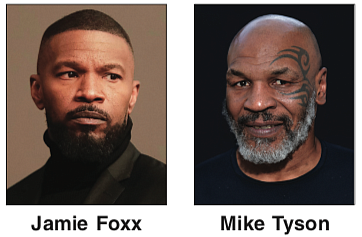 Jamie Foxx is in the gym muscling up for what he hopes will be a knockout performance.

The 52-year-old actor will play the lead role in an upcoming biopic on the controversial career of former heavyweight boxing champion Mike Tyson.

Mr. Foxx is known for his great performances in such film roles as Ray Charles in “Ray” (2004); Django Freeman in “Django Unchained” (2012) and Walter McMillian in “Just Mercy” (2019). He also is an accomplished singer, comedian, songwriter and producer.

Speaking on Instagram Live with Hollywood producer Mark Birnbaum, Mr. Foxx announced production “is in the works” on “Finding Mike.”

Few details were given but Mr. Foxx promises he is pushing himself to pack on muscle and to appear more like the power- ful Mr. Tyson.

Mr. Foxx was quite an athlete himself growing up in Terrell, Texas. He starred in basketball and football and was the first quarterback in Terrell High history to pass for more than 1,000 yards.