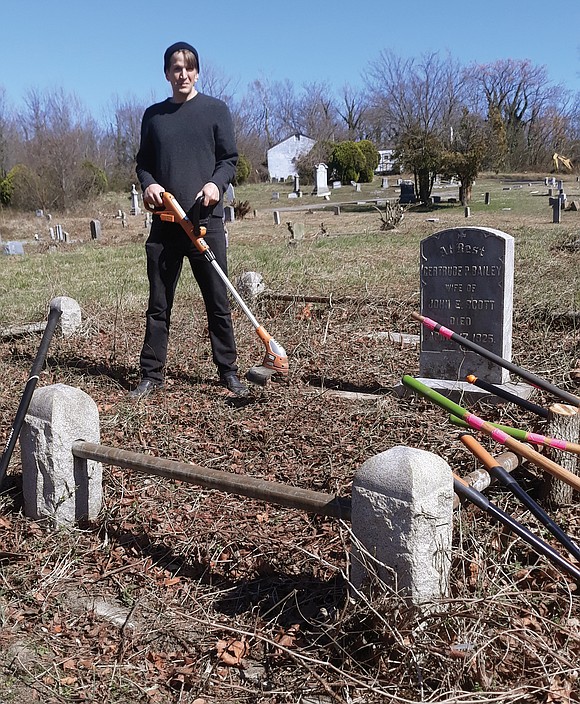 Dr. John Slavin gets ready for more weed whacking at private Woodland Cemetery in Henrico County. He has been volunteering every Sunday for 18 months to help clear overgrown grass, vines and trees and restore the historic, private African-American cemetery that dates to 1916. Photo by Jeremy Lazarus

Woodland Cemetery, the burial place of humanitarian and tennis great Arthur Ashe Jr. and thousands of other African-Americans, is looking spiffier, thanks to the dogged persistence of one man, John William Joseph Slavin.

Since September 2018, Dr. Slavin, an innovative scientist whom friends call “Bill,” has spent his Sunday afternoons cleaning up the 104-year-old private cemetery located at 2300 Magnolia Road in Henrico County, just east of Highland Park in the city’s North Side.

Armed with weed whackers, shovels, saws, bags and other equipment, the volunteer caretaker and a few friends have gone after the litter, tall grass, vines and trees that have started to take over the grounds and obscure the gravestones.

The cemetery’s story is all too typical of African-American cemeteries founded long ago without perpetual care funds to ensure future maintenance. Today, volunteers are a key to reclaiming such cemeteries.

For example, John Shuck, Marvin Harris and Brian Palmer have been notable leaders in working to restore Evergreen and East End cemeteries and in recruiting volunteer brigades to take part.

Woodland dates to 1916 when banker and black newspaper editor John Mitchell Jr. joined with a group to buy the property to create the cemetery.

Since 1973, the cemetery has been owned by Richmonder Isaiah Entzminger, 94, who cared for the property until advanced age and illness left him unable to handle the work. For the past three years, the cemetery essentially has been abandoned.

Enter Dr. Slavin, 38, who has no connection with anyone buried there, but has become the cemetery’s most significant advocate as it fits into his idea of creating a walking and biking trail to connect with Downtown.

He came upon Woodland Cemetery as he explored the area and potential routes, and believed the burial ground would be an important element of the route. He also saw the condition of the grounds. Since taking the initiative 18 months ago, Dr. Slavin has created a Woodland Cemetary Volunteers page on Facebook as a volunteer recruitment tool. That page, he said, helped attract a steady volunteer, schoolteacher Kathleen Harrell.

His engagement with the cemetery is a world apart from tiny Rural Retreat in Wythe County in far Southwest Virginia where he was born and grew up and the fields of chemistry and computers in which he has spent his career.

A transplant to Richmond, he is much better known as the founder and leader of two novel nonprofits, Indie Lab RVA, which provides community-based lab space to allow people to test ideas and gain knowledge, and Hack.RVA, a creative, computer-filled space “dedicated to the art of making things in a fun and positive community.”

Indie Lab enabled him to connect with another innovator, Joel Meeks-Matous, 63, a recognized expert in nanotechnology and new thinking about materials, who had his own business in Los Angeles that he folded into Indie Lab.

Mr. Meeks-Matous got involved in the cemetery project even as the two men worked to create Librecycle, a fresh approach to recycling the precious metals in computer hardware that has outlived its usefulness.

Mr. Meeks-Matous, who remains based in Los Angeles, takes part in the Sunday work when he is able to spend time in Richmond.

Dr. Slavin remains committed to the work of caring for the cemetery. For him, it is an opportunity to create community connections that did not exist.