Coronavirus pandemic disrupts work, study and play as the number of cases rises throughout the state 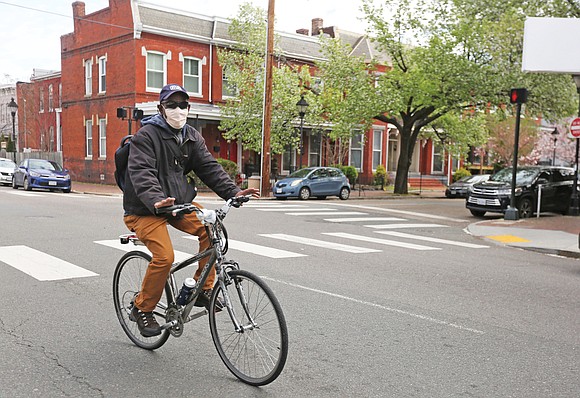 A man rides his bicycle through Jackson Ward on Tuesday wearing a medical mask as an extra precaution during the continuing spread of COVID-19 in Virginia. Photo by Regina H. Boone

Coronavirus has been uncovered in Virginia’s capital city, adding to the anxiety and concern about the illness.

Four people in Richmond have tested positive for COVID- 19, the latest development for a pandemic that has resulted in 77 infections and two deaths in the state and has seen local and state officials take increasingly measured steps to combat and prevent the virus’ spread.

Mayor Levar M. Stoney confirmed the virus’ arrival in Richmond during a news conference Wednesday at City Hall. He said the people infected, two in their 20s and two in their 30s, recently had traveled outside the state.

Three of the infected had traveled as part of a group trip to North Carolina with another person from Henrico County, who also has been confirmed as infected. The three cases were discovered during the investigation into the Henrico case, according to Dr. Danny T.K. Avula, director of the Richmond and Henrico health districts.

The fourth person in Richmond testing positive for the virus traveled to New York, where he came in contact with a person who has tested positive.

All four people have self-quarantined at home, as the Virginia Health Department works to trace their travels and previous contacts.

Officials announced Tuesday that a resident of Westminster Canterbury in Henrico County, a man in his 80s who had returned from a trip Florida, also has been hospitalized at VCU Medical Center.

Officials said he is one of two people being treated at VCU for the virus.

“We are in uncharted territory,” Mayor Stoney said. “Now is the time to increase our diligence and keep each other accountable.”

Schools and libraries have been shut down, with a mass shift to continue service through online resources in a bid to reduce the virus’ spread. Concerts, festivals and most sporting events across the country have been postponed or canceled.

Restaurants that are open are being limited to 10 customers at a time or are offering only to-go service like Mama J’s Kitchen in Jackson Ward, while malls and movie theaters are cutting hours, along with government agencies that offer critical services, such as the Department of Social Services.

Behind this dramatic effort and encouragement of people to keep away from each other is the deep concern the contagious virus could overwhelm hospitals and the rest of the public health system. With a vaccine still months away, separation to allow the virus to run its course in those infected appears to be the only option.

The real problem is that identifying those who have COVID-19 has proven nearly impossible. Testing is limited, and people can spread the virus to others for two to 14 days before they start having symptoms, including dry cough, fever and difficulty breathing. Estimates from top health experts are that there are 50 people infected for every confirmed case.

According to the health experts, the number of people with the virus can double every three days and quickly get out of control.

While most people will shake off the effects quickly, an estimated 15 percent of people who get the virus might need hospitalization and 5 percent could require intensive care and ventilators. Hospitals do not have the beds or ventilators to handle the hundreds and potentially thousands of patients who would need such care.

At Free Press deadline on Wednesday evening, the Virginia Department of Health had confirmed 77 positive cases of the virus in the state, including two cases in Henrico, five in Chesterfield, and one in both Hanover and Goochland. The VDH also confirmed the deaths of two men in their 70s from the virus on Saturday and Monday, both of whom lived in James City County near Williamsburg.

Currently, 1,278 people in Virginia have been tested for the coronavirus by the state lab, officials said. This doesn’t include testing done by private health labs, meaning the number of tests, and potential positive cases, are likely to rise in the coming days and weeks.

To help speed the testing process and lighten the potential load on hospitals, the VDH established its first pop-up COVID-19 testing site Wednesday afternoon in Henrico’s Dorey Park, with more than 100 people tested during the course of four hours. The VDH has plans for another pop-up location perhaps this weekend, but further details were not available Wednesday as health officials were still working to get more test kits from private companies. People interested in being tested must call (804) 205-3501 to be screened for symptoms and to be registered.

“It’s the first time that we’re doing something like this. Our hope is that we can work out the kinks and then start to replicate this around the region,” Dr. Avula said. “There clearly is a need for more and more testing at the community level.”

Bon Secours Health System also announced plans for regional sites devoted to testing for the virus, though no date has been given for when or where that will begin.

To mitigate chances of the virus spreading further, Mayor Stoney said Richmond will be collaborating with health officials to enforce the 10-person limit on public gatherings that Gov. Ralph S. Northam imposed on Tuesday.

An adoption of federal guidelines, the order affects restaurants, malls and other businesses serving the public and is one of many new measures by the state government to ensure public safety and lower the chances of transmission or infection.

Other measures already in place include a two week hiatus for Virginia’s K-12 schools — with Richmond Public Schools closing through April 13, though online resources are being made available.

Most universities are shifting to online courses, with students being cleared from campuses. Some schools, including Virginia Commonwealth University and University of Richmond, have canceled or postponed upcoming graduation ceremonies.

Dominion Energy and Richmond Public Utilities are pitching in to help people stay in their homes by ending disconnections of electricity, water, sewer and gas service until the emergency is over.

GRTC started providing free rides on every service, while the Virginia Supreme Court Wednesday ordered lower courts to halt all eviction hearings that do not involve an emergency.

To help workers being laid off, the Virginia Employment Commission has dropped the state’s one-week waiting period to apply for unemployment. Other arms of the government are making it easier for businesses and workers to access aid. In other cases, access is being limited to reduce public contact and possible spread of the virus. For example, the state Department of Motor Vehicles has closed its offices and limited all service to online interactions.

“We can and will get through this difficult time, but we must do so together,” Gov. Northam said during a briefing on Tuesday.

The State Corporation Commission on Monday directed all regulated utilities to suspend service disconnections for 60 days after a petition from Virginia Attorney General Mark R. Herring was sent calling for the suspension.

Comcast has responded to the virus’ presence in Virginia by increasing the speed and access of its internet services, including offering free internet service to low-income households.

Despite these steps, there are still more areas of Virginia life left unaddressed in the wake of the pandemic.

While Gov. Northam noted the failure of a paid sick leave bill to pass the General Assembly earlier this year, he said there are currently no plans for legislative action beyond the recon- vened session on April 22, despite calls from Republican and Democratic legislators for a special session.

The Virginia Interfaith Center for Public Policy on Tuesday called on the governor to use his emergency authority to institute paid sick and employment protections.

Meanwhile, there is an effort to have some of those locked up released from jail. Attorneys with the Richmond Public De- fenders Office asked the judges of the city’s General District, Juvenile and Domestic Relations and Circuit courts to order the release from jail of the city’s non-violent offenders. The letter urged the action to reduce the chances of the coronavirus among those now held in custody.

Officials stress that Virginians will have to practice caution, cleanliness and selflessness for themselves and each other to slow the spread of coronavirus.

Health officials, meanwhile, are urging anyone 65 or older to self-quarantine.

“This is just the beginning,” Mayor Stoney said. “We have to be vigilant, personally vigilant, in this combat versus COVID-19.”

To protect yourself and others from coronavirus, the Centers for Disease Control and Prevention recommends the following:

• Wash your hands often with soap and water for at least 20 seconds especially after you have been in a public place or after blowing your nose, coughing or sneezing.

• If soap and water are not readily available, use a hand sanitizer that contains at least 60 percent alcohol. Cover all surfaces of your hands and rub them together until they feel dry.

• Avoid touching your eyes, nose and mouth with un-washed hands.

• Put distance between yourself and other people if COVID-19 is spreading in your community. This is especially important for people at higher risk of getting sick, including older people and those with underlying medical conditions.

• Stay home if you are sick, except to get medical care.

• Cover your mouth and nose with a tissue when you cough or sneeze or use the inside of your elbow.