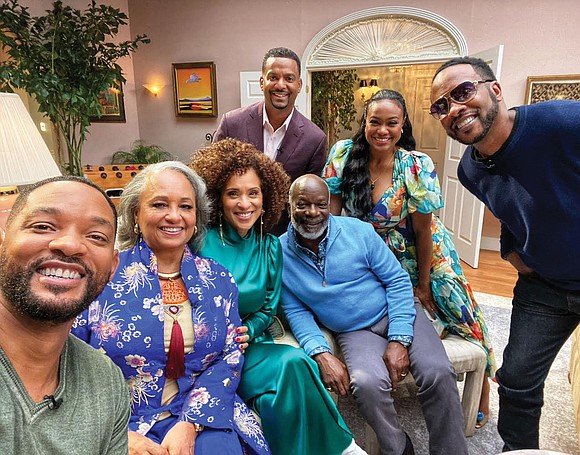 Actress Daphne Maxwell Reid recently joined the cast of “The Fresh Prince of Bel-Air” for a reunion show airing this week, 30 years after the popular TV sitcom premiered in 1990.

The Petersburg resident and nationally known creative force played Aunt Viv in the show that was centered around the life of a young African-American teenager, Will Smith, from the streets of West Philadelphia who was sent to live with his aunt and her family, the Banks family, at a mansion in Bel-Air, Calif., in the 1990s.

Mrs. Reid stepped into the role at the start of the fourth season, replacing actress Janet Hubert, who left the show.

As Mrs. Reid arrived on the set in September to record the reunion show, she was amazed that Mr. Smith’s production company, Westbrook Media, found all of the props from the original set — artwork, the living room couch and kitchen furnishings.

“It was great to see everybody all at the same time,” Ms. Reid said of her sitcom family. “We’ve seen each other in bits and pieces over the years — at weddings, childbirths and funerals. However, seeing everyone in the same place on the set was incredible.”

During the reunion, the cast members offered thoughts about their experiences and memories of each other, as well as the show’s production.

Surprisingly, Mrs. Reid said she didn’t want to audition for the show when it first started. But after Ms. Hubert, the original Aunt Viv left, “I was ready to go.”

The entire cast was not present for the reunion. James Avery, who played Uncle Phil, died on Dec. 31, 2013, in Glendale, Calif., after open-heart surgery. He was 68.

Mrs. Reid, who is married to actor and film director Tim Reid, said she fell in love with Mr. Avery at her audition. “He was such a warm and embracing, talented and funny, interesting and intelligent human being,” she said in a Free Press interview.

“He, like Jazz, collected jazz, black memorabilia and posters. He loved to read and was anxious to share and was always curious,” she said. “Our families traveled together to London and Richmond, England, and drove all over the countryside,” she recounted. “We had a blast!”

“The program explores modern-day race, socio economic and family issues, while being laced with comedy, and left a legacy for three generations of viewers,” Mrs. Reid said.

The story lines of an inner-city cousin from Philly—a fish out of water character—and his Black upper-income relatives taking him in as they work through common family interactions “translate over generations.”

“In the end, the show’s outcome would bring the family together,” she said. “ ‘The Fresh Prince’s content was universal and applied to any family.”

When Mrs. Reid joined the cast in the fourth season, Mr. Smith had gotten his acting chops down and began to plan for his next step in the entertainment business, she said.

“Will Smith was a lot of fun,” she said. “During the last three years, he was very much into the business side of things and didn’t hang around with the cast a lot.

“Westbrook Media, a conglomerate of all of Mr. Smith’s businesses, is an outgrowth of his developed entertainment business acumen,” Mrs. Reid continued. “He has some of the most talented people working for him. The crew, as they produced the reunion, was a pleasure because they were so highly professional.”

In an emotional and heartfelt segment, the reunion special also shows Mr. Smith’s private reunion with Ms. Hubert. The two had not seen each other since Ms. Hubert’s controversial departure.

In another holiday program, Mrs. Reid also will star in the film “The Business of Christmas,” which centers on an effort to save the Franklin family’s store and home. Ms. Reid plays Mary Ann Franklin. While doing so, the family re-discovers the core values of love, family and the holiday spirit.

“The Business of Christmas” airs Dec. 1 on BET+.