LaMelo Ball to be among top picks in NBA draft 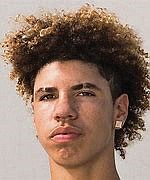 LaMelo LaFrance Ball has a catchy name, a wealth of talent and a story like none other.

No wonder he has coined his own self-description as “One of One.”

Having turned 19 in August, Ball fig- ures to be among the top picks—perhaps even the No. 1 pick—in the Nov. 18 NBA draft.

There are so many unusual chapters in the teen’s young life that a storyteller hardly knows where to begin.

The couple’s oldest son, 23-year-old Lonzo, 6-foot-6, starred one season at UCLA before being chosen by the Los Angeles Lakers as the second overall draft pick in 2017. He has since been traded to the New Orleans Pelicans.

The couple’s middle son, LiAngelo, 21, who is 6-foot-5,played this past season for the Oklahoma Blue of the NBA’s Gatorade (Developmental) League.

Shoe business: In 2017, LaVar Ball unveiled his own sports gear company called “Big Baller Brand.” All the brothers have roles in their Facebook Watch reality show “Ball in the Family.”

Meanwhile LaVar, CEO of Big Baller Brand, has become a media celebrity with his bold and flamboyant statements. For example, he proclaimed Lonzo to be “better than Steph Curry” when Lonzo was still in high school. Also, he said he himself “could beat Michael Jordan in a game of one-on-one.” While his statements rankled some, the media ate it up.

LaVar also founded the Junior Basketball Association, in which his sons dabbled.

Long and winding road: LaMelo began his high school career at Chino Hills High School near LosAngeles, where he once scored 92 points in one game. He played his freshman and sophomore seasons at Chino, but was homeschooled as a junior and did not play.

At that juncture in 2018, LaVar arranged for LaMelo to sign a professional contract with the Lithuanian team Prienai. More recently in 2019-20, he suited up for the Illawarra Hawks in Australia, where he earned league Rookie of the Year honors.

What’s really confusing is that in November 2018, LaMelo returned to the United States to play high school ball for SPIRE Institute of Geneva, Ohio. That was between pro stops in Lithuania and Australia. SPIRE played a game that season at Virginia State University against Life Christian Academy in Chester. Ball’s reputation was used to promote the contest and sell tickets, but he did not play that night for undisclosed reasons.

College recruitment: Among the schools pursuing LaMelo Ball were Washington State; UCLA, where LiAngelo briefly attended; and the University of Virginia. By that time, he already had an agent.

He was generally considered the No. 1 guard in the country, but there were so many red flags concerning his professional status that nothing materialized.

Also at that time, LaMelo had his own signature basketball sneaker, Melo Ball 1, manufactured by Big Baller Brand.

With that, LaMelo passed on the more traditional approach of college “one and done.” Why play simply for room, board and tuition when you can take good money to the bank?

Latest adventure: Earlier this month, LaMelo signed a multiyear shoe deal to represent Puma Basketball. No financial terms were disclosed. The “LaMelo signature model” is supposed to be revealed Nov. 18.

Not coincidentally, that’s the same day of the NBA draft, which is to be held via teleconference from the ESPN Studios in Bristol, Conn.

What’s next? With LaMelo specifically, and the Ball family in general, it’s best to predict something out of the ordinary on the horizon. You never know. The Balls don’t follow road signs. They carve their own.