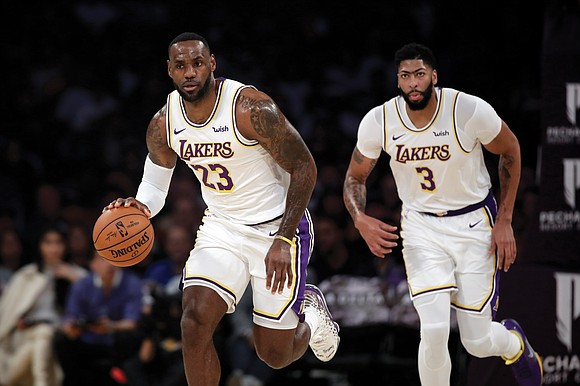 LeBron James and Anthony Davis may be the most entertaining one-two combination since rock and roll.

Now, we’ll learn if the talented twosome can bust the right moves to lead the Los Angeles Lakers to an NBA championship.

If the Lakers can “hit it” and defeat the Denver Nuggets to reach the NBA Finals, much will depend on James, 35, among the greatest of all time, and Davis, 27, perhaps the top star of the future.

The winner of the conference finals will advance to meet the survivor of the Miami Heat-Boston Celtics Eastern Conference finale.

Some background on the duo:

The beginnings: Born in Akron, Ohio, James is the son of Gloria Marie James, who was 16 at the time, and Anthony McClelland, who played no role in his son’s formative years.

Davis grew up on the South Side of Chicago, the son of Anthony Davis Sr., 6-foot-3, and Erainer Davis, 6-foot-1.

College: James made an early verbal commitment to Ohio State University, but then opted for the NBA draft.

Davis played one season for the University of Kentucky, earning consensus 2012 National Player of the Year honors and leading the Wildcats to the NCAA title.

Draft: James was selected first overall by the Cleveland Cavaliers in 2003.

Davis was the first overall pick by the New Orleans Hornets, now Pelicans, in 2012.

With New Orleans, Davis was a seven-time All-Star, a single All-Star MVP, a four-time All-NBA pick, two All-Defensive selections and three-time blocked shots leader. About all that’s missing is the team championships.

L.A. arrival: James opted out of his Cleveland contract in 2018 and signed with the Lakers as an unrestricted free agent on July 9, 2018.

The Pelicans traded Davis to Los Angeles in June 2019 for Brandon Ingram, Josh Hart and Lonzo Ball, plus three first round draft choices.

In addition to his extraordinary skills on court, Davis draws attention for his famous “uni-brow.” He refuses to shave it.

History lesson: The Lakers are renowned for their potent pairs.

Hall of famers Wilt Chamberlain and Jerry West led the Lakers to the 1972 title. When together, they posted a regular season record of 214-74 and 43-25 in the playoffs.

Two more hall of famers, Kareem Abdul-Jabbar and Magic Johnson, led Los Angeles to five championships in 10 seasons, a 506-179 record in the regular season and a 110-47 mark in the playoffs.

Then came Shaquille O’Neal and Kobe Bryant, arguably the best guard-big man combination in the annals of the game. The Lakers won three NBA crowns in their eight seasons together.

NBA Finals are pro basketball’s version of the Big Dance. It’s time to see how the Lakers’ towering tandem kicks up its heels. The band is warming up.