Roxie Raines Kornegay Allison, whose activism led to diversity on state boards and commissions, dies at 83 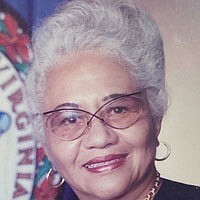 Roxie Raines Kornegay Allison championed Black inclusion in government and public contracting while also opening her heart and her home to children and adults who needed a helping hand.

Politically engaged and never shy about voicing her opinions, Mrs. Allison was described by one of her friends as a “spitfire of a woman who constantly uplifted others.”

Mrs. Allison led the Virginia Council on Human Rights for eight years and organized the Virginians for Black Inclusion in Government, or VBIG, to push for more appointments of African-Americans to state boards and commissions.

During her multifaceted life, she also founded and ran a construction company for a few years in Indiana, taught dance and health classes at universities in Hampton and Buffalo, N.Y., operated a Richmond restaurant and was active in her church and in community affairs, including the Richmond Crusade for Voters.

“In politics, she was an advocate for the Black community, but she also had a kind heart. She was always trying to help someone. She mentored young people who were going astray and helped others who needed a hand,”’ said her longtime friend, Bernice Travers, who like Mrs. Allison, is a former president of the Richmond Crusade for Voters.

Phyl Charity, whom Mrs. Allison raised as a surrogate mother and grandmother, described her as “the strongest, most forward-thinking woman I’ve ever known.”

Mrs. Allison’s contributions to individuals and community betterment are being remembered following her death on Thursday, Jan. 28, 2021. Ms. Travers said Mrs. Allison died at an area hospital of complications from COVID-19. She was 83.

A memorial service will be held at a later date.

Born in Raleigh, N.C., Mrs. Allison grew up in Richmond and graduated from Armstrong High School. She earned her bachelor’s from Virginia State University in health and physical education and later earned a master’s degree in education from Hampton University, where she taught dance and health classes for some years.

After a brief first marriage, Mrs. Allison made her way to Indianapolis, where she started a construction company and also sought to organize Black contractors to push for greater inclusion in the developments the city government was building.

She later went to Illinois to work for Westclox, then took a position teaching dance at the University of Buffalo, said Mr. Charity, who traveled with her along with his mother and another surrogate son, Christian Mitchell.

In every place they lived, Mr. Charity said, she was always bringing people home who needed help or a place to stay while they went to school. “At least 50 different people stayed with us through the years,” he said. Some were members of her extended family. Others were people she had come to know and wanted to help, he said.

Disliking the heavy winter snows of Upper New York, Mrs. Allison returned to Hampton to teach and then moved to Richmond to work as an Equal Employment Opportunity analyst for the Virginia Department of Transportation.

Meanwhile, she also was involved in helping her brothers operate the former family business, Glenn’s Tavern on Chamberlayne Avenue. She also was active in Richmond politics, serving two years as president of the Richmond Crusade for Voters.

When Republican George Allen was elected governor in November 1993, Mrs. Allison was among a group of Black women who met with him to lobby for greater Black inclusion in government. One result was her appointment to lead the Virginia Council on Human Rights, which she sought to strengthen as an investigative body in cases of discrimination. Becoming a Republican, she led the agency through the administrations of Gov. Allen and his successor, Gov. Jim Gilmore.

U.S. Sen. Tim Kaine, who was a neighbor of Mrs. Allison for nearly 30 years in Laburnum Park on North Side, extolled her as a “pioneering political and civil rights activist in Richmond.” He also described her as the matriarch of the neighborhood and credited her for playing a big part in winning recent Richmond City Council support to change the name of their street from Confederate Avenue to Laburnum Park Boulevard.

Mrs. Allison was an active member of Ebenezer Baptist Church, where she taught Sunday School classes and served on various church committees, including those for the building fund, voter registration and community empowerment.

Mrs. Allison was predeceased by her second husband, Fletcher Allison.

While she never had children of her own, her survivors include those who considered her their mother and whom she helped raise, Mr. Charity, Mr. Mitchell, Marc Anthony Heathcock and Emerald Rutherford; five stepchildren, Justin Allison, Kirk Allison, Michael Lancaster, Kevin Lancaster and Stefany Allison; and her brother, Glenn G. Raines Sr.