Problems were popping up all over.

If it wasn’t one thing, it was something else. Everything piled up on the John Marshall High School football program, leading to the cancelation of the season.

“It was one of the hardest decisions I ever had to make,” said John Marshall Activities Director Daynelle Smith.

Smith cited “low participation numbers (low enrollment), lack of resources, inconsistency and injuries” as contributing factors leading to the abrupt end of the season with five games left on the schedule.

“After weighing the pros and cons with head Coach Willie Gillus III and the administration, we felt it was the best decision to protect the safety of our student-athletes,” Smith said.

The decision to cancel the remainder of the season was made after the team’s four lopsided losses: 54-0 to Douglas Freeman High School, 37-0 to Thomas Jefferson High School, 62-6 to Petersburg High School and 68-0 to Armstrong High School.

Facing a demanding schedule of opponents from Western Henrico and Hanover counties, there was no soft landing spot in sight.

Coach Gillus’ varsity was down to 30 athletes on the roster, but only 16 juniors and seniors and only four offensive linemen. There was never a junior varsity team. Many had never played football before this season.

John Marshall also lost six play- ers for the season to injury and four turned in their uniforms for personal reasons.

Smith insists it’s only a speed bump and not a dead end for John Marshall Justices football.

“We will use the remainder of the season to rebuild our program through strength and conditioning, nutrition, tutoring, 7-on-7’s, attending camps and other important factors,” Smith said.

The name Willie Gillus III might ring a bell with college football fans. Willie Gillus Jr. was a record-setting quarterback at Norfolk State University and later served as the Spartans’ head coach.

Gillus Jr. also was the offensive coordinator at Virginia Union University before getting the head job at NSU in 2003. Gillus Jr. played in 1987 with the NFL Green Bay Packers.

John Marshall hasn’t always been down on its luck. In 2019, the Justices were 6-5 under Coach Phillip Sims, with victories over Bluestone, Mills Godwin, Armstrong, Tunstall, J.R. Tucker and Glen Allen high schools. 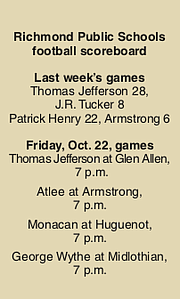