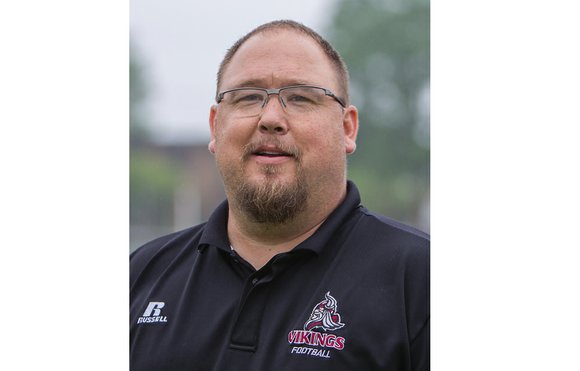 Chad Hornik scored noteworthy victories, both on and off the field, as football coach at Richmond’s Thomas Jefferson High School from 2012 to 2015.

Now his successor, Chris Mitchell, intends to build on that momentum.

“There’s a ton of talent here. We just need to translate that talent into more wins,” said the new coach.

In seven seasons prior to Coach Hornik’s arrival, TJ was 1-69, with the lone win over Henrico’s J.R. Tucker High School in 2007.

Under Coach Hornik, the Vikings were 9-32, including 3-7 a year ago. In 2012, TJ qualified for the Regional playoffs for the first time in 37 years.

Perhaps more importantly, Coach Hornik spearheaded fundraising for the team with creation of the TJ Vikings Fund. This resulted in new uniforms, a locker room makeover and upgrades in equipment and the school’s football field.

Coach Mitchell was a lineman/linebacker at Patrick Henry High School in Roanoke and played one season at Emory & Henry College.

He was assistant coach at Chesterfield’s Manchester High School from 2002 to 2007, before operating his own business, Inflation Nation, a playground-party center, until 2014.

While in private business, Coach Mitchell coached in the Alberta Smith Association of the Chesterfield Quarterback League and with the Metro Association Giants.

After closing his business, Coach Mitchell was hired as a teacher-coach at TJ. His wife, Stephanie, serves as an administrative assistant at the school.

Thomas Jefferson High, which opened in 1930, has never had lights for evening games. Neither do John Marshall and George Wythe high schools.

Based on enrollment, Thomas Jefferson is classified 3A by the Virginia High School League. The scale runs from 1 through 6.

The Vikings fill out the slate with trips to 3A Armstrong High School in Richmond and to St. Christopher’s, a private school powerhouse.

Conceding there are “all kinds of issues” at the inner-city school, Coach Mitchell would rather accentuate the positive than dwell on negatives. He is quick to sing the praises of his young athletes, starting with Jalen Johnson, who was named the All-Conference 26 quarterback as a sophomore.

Another player he described as “dynamic” is Melvin Dickson, a versatile back that Coach Mitchell feels can be a game breaker.

The Vikings coach says Johnson and Dickson have been invited to Virginia Tech’s summer camp.