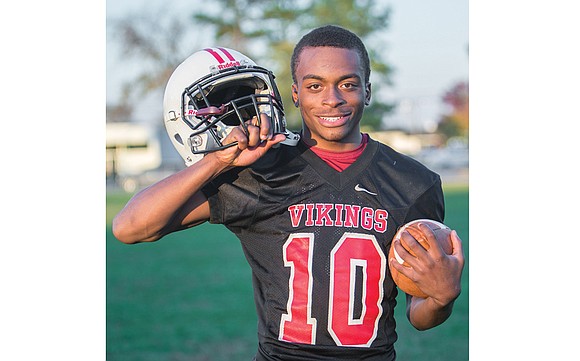 Richmond’s Thomas Jefferson High School is the feel-good story of this football season.

The long-suffering Vikings have graduated from powder-puff to powerhouse. The football program that was 2-78 from 2005 to 2012 and hadn’t enjoyed a winning season since 1976 is now all the rave in the river city.

Under first-year Coach P.J. Adams, the new-era Vikings improved to 8-3 last Saturday with a tense, 13-12 home win over Armstrong High School in the quarterfinals of the state Class 3, Region B playoffs.

“To start this season, the only people who would have thought this possible were the coaches and the 40 boys on the team,” Coach Adams said.

The fun is only beginning. Next up is the Region B semifinal game on Friday, Nov. 17, against Culpeper County High School.

The game has been moved from Thomas Jefferson’s less than luscious on-campus gridiron, known affectionately as the “Onion Patch,” to Huguenot High School. Kickoff is 7 p.m.

The list of credits for Thomas Jefferson’s head-spinning improvement goes on and on, starting with the high-energy quarterback.

Hyphenated hero: In the season’s fifth game, Coach Adams switched Anwar Wilson-Bradley from wideout to quarterback. That’s when the Vikings’ offense soared like a rocket.

With Wilson-Bradley operating in shotgun out of a read option set, the Vikings averaged 41 points in the last six outings.

The 6-foot-2, 182-pound senior has spelled double trouble. In six games taking snaps prior to the playoffs, Wilson-Bradley rushed for 925 yards and nine touchdowns and passed for 708 yards and five touchdowns.

The versatile Wilson-Bradley, who also plays defensive cornerback, rushed for 154 yards in the TJ win.

Jackson of all trades: Senior Jalen “Buddy” Jackson, who has played virtually every position on the field at some juncture, looms as a candidate not only for conference and region player of the year, but also for state player of the year.

The explosive, all-purpose Jackson rushed for 1,425 yards and 21 touchdowns — including eight in one game — prior to the playoffs.

Jackson presents a dilemma to tacklers. The big guys can’t catch him and the smaller guys don’t have the power to bring him down. The 5-foot-10, 215-pounder was slowed in the last TJ game with a tender ankle.

Big man on campus: While the Vikings lack size overall, you can’t miss 320-pound Wesley Hicks, aka “Milkshake.” Despite a limited football résumé, Hicks provides ample blocking and is among the squad’s top students.

“It was a matter of building confidence,” said Dr. Holt. “Once our kids starting winning and playing competitive games each week, the confidence grew to a point they feel they can beat anyone.”