TJ hoping for the playoffs 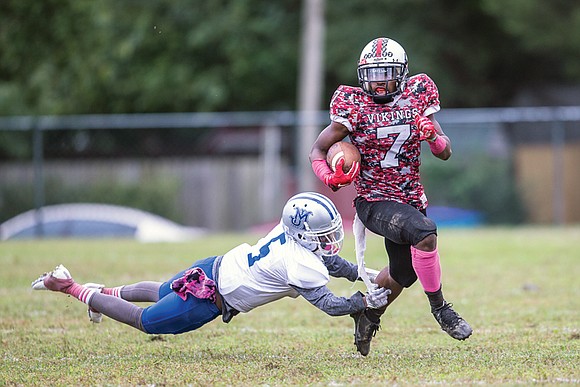 Coach Mitchell’s Vikings are a best-in-years 3-3 following a 21-16 win over John Marshall High School last Friday. And the team’s remaining matchups are less than ominous.

“We’re in good shape to make the playoffs and even host a first-round game if we can win two of the last three,” said Coach Mitchell. “It has been a long time since TJ has been .500 this late in the season.”

The West End school is playing a nine-game schedule this season.

The top eight in the region advance to the playoffs beginning Nov. 11. The Vikings are ranked fourth this week in the East Region.

Celebrating homecoming and Senior Day for its lone home game of the season, Thomas Jefferson overcame a slew of early penalties and turnovers to defeat the Justices (now 1-5) for a fourth straight year.

The TJ-JM rivalry ranks among Virginia’s oldest, dating to the 1930s. Traditionally, Thomas Jefferson and John Marshall played the final game of the season at City Stadium on the Friday night of Thanksgiving weekend.

The most recent TJ-JM contest drew a spirited crowd of red-clad students and alumni at the Vikings’ ancient gridiron just off Broad Street.

Kavon Blackwell was in on 12 tackles, with two sacks, and Roshun Patterson added a key interception.

Woolfolk ranks with the area’s most versatile athletes. In addition to football, he plays Vikings volleyball, basketball, baseball and soccer.

Coach Mitchell previously served as an assistant under Chad Hornik, who left Thomas Jefferson to coach this year at Deep Run High School.

Thomas Jefferson was 1-69 in the seven years before Coach Hornik arrived with fresh enthusiasm and organization. The Vikings improved to 9-32 in Hornik’s four seasons, including 3-7 a year ago.

The TJ-Deep Run regular season finale figures to be a spirited affair, to say the least.