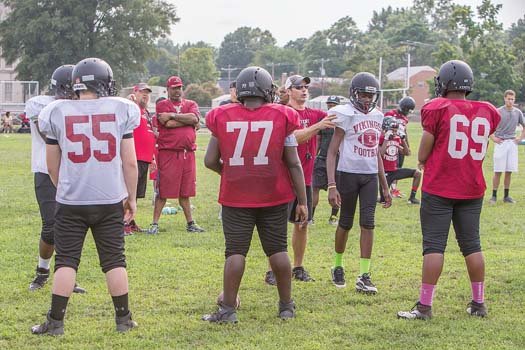 Thomas Jefferson coach Chad Hornik, center in sunglasses, prepares the Vikings for the upcoming season. The team will travel Aug. 29 to Colonial Heights for its first game. Photo by James Haskins

Check out this three-year progress report:

“We’ve got some great things going on,” said Hornik. “And with 16 starters coming back, we’re going to get better.

“But how that will be reflected in the record remains to be seen.”

TJ’s three wins in 2013 surpassed the previous seven years combined. Finishing 3-8, the Vikings made the VHSL playoffs for first time this century, falling at Central-Woodstock.

Hornik’s determined behind-the-scenes work, with the aid of assistant coaches and a TJ Vikings Fund support group, has worked minor miracles at the ancient West End school that opened in 1930.

Against schools of similar enrollments (about 800), the Vikings have scrapped their cannon fodder image and appear primed for a breakout campaign.

TJ’s albatross is a heavy schedule.

While TJ is a 3A school, it is locked into a slate with 5A/6A schools twice its size in western Henrico and Hanover.

TJ is member of 3A Conference 26 but doesn’t play a C-26 schedule except for John Marshall, Armstrong and Petersburg. Bound by contract, TJ continues facing what amounts to an old Colonial schedule.

Despite being the underdog most nights, the Vikings hope to nudge their victory count forward, albeit slightly, and return to 3A playoffs for more evenly matched gridiron tussles.

Hornik, also owner of the Melting Pot restaurant, would prefer accentuating positives in an upward-bound program.

Here’s what Hornik says of these Vikings standouts:

Quarterback Asante Williams: “His legs will cause lots of problems (for defenses),” says Hornik. “Our offense is designed to accommodate his running talent.”

Jefferson was one-third of a powerhouse during period when Thomas Jefferson, Huguenot and George Wythe merged to form the “JHW complex,” 1979-85.

Other “complex” programs were the Armstrong-Kennedy Jaguars and the Marshall-Walker Cavaliers.

Ex-Vikings include All-State receiver Philip Logan, who went on to star at the University of South Carolina. From 1974-77, Logan caught 105 passes for 2,063 yards and 15 touchdowns. His 19.6 yards-per-catch average still ranks No. 1 among Gamecocks.